Another world inside the UN 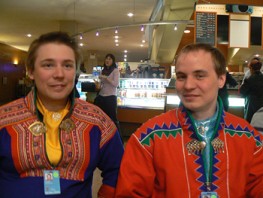 There is just something about the Big Apple that makes it impossible to resist a trip here even if it comes at the busiest of times. It’s difficult to pin down exactly what it is about New York – something to do with the buzz, the vibrancy, the colour, the anonymity, the attitude, the art, culture, knowledge on offer – all of which makes it special even to someone who does not easily appreciate western capitalist culture and symbolism!

But this is not about New York (I eventually did wake up to the fact that I was not on paid holiday). I am here to attend the United Nations Permanent Forum on Indigenous Issues (UNPFI) focusing this year on the impact of climate change on indigenous peoples. Following the release of a recent publication on climate change and minorities, MRG is looking to expand its work on how the scourge of our times affects minority and indigenous communities. We have chosen this issue as one of our online campaigns for this year and the UN forum, which brings together UN member states, experts and indigenous community representatives, could not be missed.

My mission: keep my antennas up, put on my journalist cap (never succeeded in getting rid of that), network but most importantly understand the issues, figure out what the communities want so we at MRG can better represent them.

Based on my experiences with other UN mechanisms such as the Human Rights Council (HRC) I was ready for an element of chaos, prepared for the politics, the diplomacy, the manoeuvring that often stains the work of the UN. But I was quite pleasantly surprised.

The first taste of what was to come was at the registration queue at the entrance to the UN headquarters in New York. Men and women in crisp suits were replaced by people wearing the most unusual, colourful shirts, dresses, sarongs, feathered hats, turbans and shawls woven, as they explain, in centuries of history and tradition. They were accessorized with beaded chains, metal medallions, feathers, flowers all heavily symbolic – as a young reindeer herder from the Sami community in Finland explains the shape of the button in their belts go as far as to indicate if they are married or not. In the main conference room the usual delegate boards naming member states are replaced by scribbled boards titled Batwa, Sami, rainforest people, Elmolo… hundreds and hundreds of different indigenous peoples from across the world proudly representing their status as the original inhabiters of the world.

The uniqueness of the UNPFI was stark. This is not a forum where states dominate with diplomats at the edge of their seats waiting to attack a country or defend their own. In fact this is forum where state parties are confined to one corner of the room and a majority of the delegates pay no respect to strictly defined borders. They often represent nations unrecognized as states and their communities spread across regions and countries. This is a forum where proceedings start not with acknowledgement to the UN or to the host country but by giving thanks to the Onondaga people, native Americans who were the original inhabitants of the land the UN is situated on (sorry, no thanks to George W Bush – not even for the visas). Elders, who are revered and respected in indigenous communities bless the forum and open the session by giving thanks to mother earth, the waterfalls and rivers, the thunder that brings rain, the sun and the air.

This is an event where the superpowers have no place and the heroes are those who defy the mainstream. Bolivia’s new Indigenous President Evo Morales, got a thundering applause and long standing ovation as he took up contentious issues of historic injustice to indigenous people and recommended a shift away from capitalist developmental models. It is a forum that not just introduces one to a whole different world but to vastly different world views – many issues that make our headlines have little relevance here – these are people that subscribe to entirely different belief systems (Samuel Huntington may want to rewrite ‘Clash of civilizations’ after a day of being here). Here you can not accuse ‘Americans’ of invading Iraq. Americans they will say are confined to reserves and national parks and had no role in invading Iraq.

For me it has been one of the most humbling and exciting learning. Throughout my work in human rights, coming from a country affected by conflict myself, I have grappled with issues of ethnicity and religion in identity formation and issues of nationhood. But this is another paradigm. The usual human rights jargon of oppression and injustice take on entirely different dimension.

I feel like making a run to a book store but I realize few history books and atlases will be accurate. The story is with the people themselves.

So I am off now, equipped with voice recorder and camera.

New mission: Climate change plus, plus.