After decades of campaigning for the rights of communities around the world, MRG is now well established as a leader in the global fight against racial, religious and ethnic discrimination. This achievement is especially impressive considering that the story of MRG began 40 years ago with only a small group of principled journalists and activists. Needless to say, 40 years of commitment and hard work deserves recognition. On the evening of February 11, MRG staff, supporters, volunteers and other friends came together in London to celebrate. I was lucky enough to be there.

MRG’s anniversary event took place at the flagship Foyles bookshop in the centre of London. Foyles stands out as one of the largest bookshops in the city and the second floor with its vast history and politics sections is one of my favourite places to waste a few free hours in central London.

Entering the crowd, I came across a mix of familiar faces from MRG’s London headquarters, as well as many others I had never seen before. Only then did I realise the true significance of our 40th anniversary. For me MRG is a team of staff and volunteers in our London headquarters and regional offices around the world, yet this crowd included many others who have played a role in MRG’s success, including donors, journalists and former staff members.

After the crowd had settled in, the evening’s main event, a discussion between two authors, kicked off. Moderator Razia Iqbal, a familiar face I’d often seen on TV in her role as a correspondent for the BBC, began the discussion by introducing her two guests. Roma Tearne, a Sri Lanka born writer and artist of mixed Tamil and Sinhalese descent whose works often focus on memory and facing the past, and Louise Doughty, an English journalist and novelist of Romany descent. 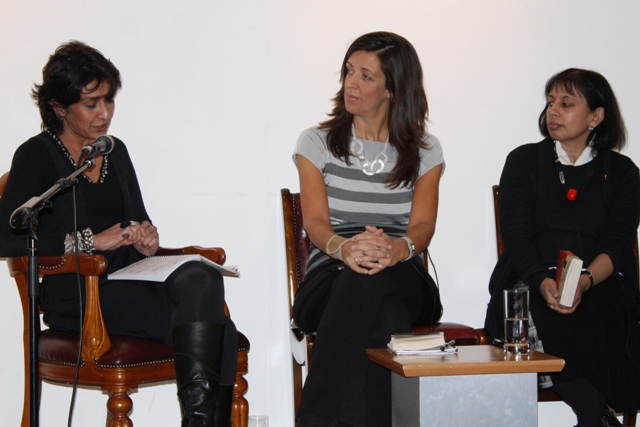 The conversation focused on how minority issues have affected each writer’s life and work. Before Roma Tearne even began to tell her story I had already imagined the difficulties her parents, a mixed ethnicity couple in a country divided by ethnic conflict, must have faced. With little choice other than to leave their homeland, Tearne’s parent remained estranged from their families in Sri Lanka for the rest of their lives. Louise Doughty explained that her family’s fear of prejudice had kept her from exploring her Romany roots in her first novels. She only felt free to write about the subject after the death of a relative who was especially afraid of his Romany roots being exposed.

The two authors were asked to share their views on the role of artists in dealing with the traumas of conflict and prejudice. Roma Tearne pointed out the importance of art, specifically novels, in preserving the public memory of historical events, but she was quick to mention the vital role that non-artistic measures, such as the establishment of truth and reconciliation commissions, play in healing a post-conflict society. Doughty, who has written widely on Roma rights, said that, although she remains primarily a novelist, her heritage makes it impossible for her not to speak out on the desperate situation many Roma communities face. Both authors declared that a search for identity and a sense of belonging as minorities had influenced their most recent works.

Because of my background in publishing, one of the most fascinating parts of the discussion for me concerned the prospects of minority writers and the depiction of minorities in British fiction. Louise Doughty explained that money was the primary motive behind the UK publishing industry’s growing interest in minority writers and issues. She pointed out that the phenomenal success of Zadie Smith’s 2000 debut novel White Teeth had proved to the industry that novels with minority lead characters can be successful with the British public. Although the recent commercial success of British minority ethnic writers such as Smith, Andrea Levy and Monica Ali definitely marks a change for British publishing, I couldn’t help but think of all the authors and possibly great works of literature that went unpublished or ignored in past decades because of prejudice.

MRG has certainly accomplished much in its 40 year history. Immediately before the event we were able to celebrate two important legal victories; one establishing that the presidency of Bosnia-Herzegovina should be open to all of its citizenry and another establishing an important precedent on the land rights of indigenous communities in Africa. I’m certain that when the next big anniversary rolls around MRG will have many new successes to celebrate and that marginalised communities around the world will have benefited from those efforts.