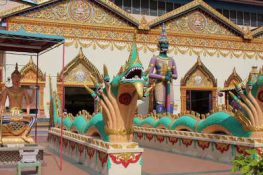 Malaysia prides itself on being a multi-cultural Muslim country. Its majority population are Malays in ethnicity who follow the Islamic religion. Some eight percent are Indians and about 40 percent Chinese. These ethnic groups profess different religions including Hinduism, Buddhism, Taoism, Sikhism,  and Christianity. The country also has a significant indigenous population known as Orang Asli.

While most of these communities live peacefully in Malaysia and are able to develop their lives and enjoy their rights, there remain a host of serious issues affecting minorities. These are human rights violations affecting people because of both their ethnic and religious identities.

During a recent visit to Kuala Lumpur the MCCBCHST (Malaysian Consultative Council of Buddhism, Christianity, Hinduism, Sikhism and Taoism) helped organise interviews with religious leaders and activists, who discussed some of the main issues affecting minorities.

When Malaysia’s economy took off in the 80’s, leading the way as one of South East Asia’s tiger economies, the country also brought in several policies privileging the majority community. Popularly known as ‘Bumiputera’ or ‘son of the soil’ these policies favour the Malay community over others

Activists explained that the policies are not always blatantly discriminatory, but they can be very subtle and impact every area of life including citizenship.

‘Though on paper citizenship is available for everyone, non-Malays seem to take a longer time to get citizenship’, says Reverend Dr. Thomas Philips, of the Christian Federation of Malaysia (CFM).

‘Malay’ as an ethnicity is intrinsically linked to Islam, together with other criteria such as adhering to Malay culture (which arguably minorities also do) and having a Malay grandparent. The main defining factor is religion.

Ethnic discrimination in education and employment

In education and in certain professions, Malays are favoured through quota systems. Malaysia is one of the few countries in the world where the ethnic majority community benefits from quotas.

‘The Judiciary, the civil service and the Police do not reflect the racial composition of the nation,’ Reverend Dr. Thomas Philips says.

Places in prestigious residential schools in Malaysia are offered only to Malay students, while across the country Malays are given a quota to enable them to have better access and to progress well to tertiary education.

‘It is a deliberate policy of one race dominating public service and education. In other countries minorities get special rights, not here. It is very difficult for minorities to survive here,’ says Sardar V. Harcharan Singh of the Malaysian Gurdwaras Council (MGC).

As religion is so closely connected to ethnicity and nationalism in Malaysia, discrimination is not just on racial grounds but on religious as well.

Non-Muslims face serious issues of discrimination simply because of their religious beliefs.

Impact of Islamic law on non-Muslims

Conversion for a Muslim, for example, is a major problem in Malaysia. If a Muslim wants to renounce Islam, he or she has to go through a long and painful legal process. Different courts have adopted procedures including sending people to months of rehabilitation before allowing them to do so. There have also been cases where individuals have been charged with apostasy and face criminal charges.

Increasingly now the courts are referring cases to Islamic, Sharia courts, which have a strict religious interpretation of the law as compared to the secular interpretation in national level courts.

In May 2007 Malaysia’s highest court ruled that Lina Joy, an ethnic Malay Muslim who wanted to convert to Christianity, should get permission from an Islamic court to be recognised a Christian, even though she had been practicing Christianity for 15 years.

‘If you want to convert to Islam it is a matter of a few minutes and the authorities will even give you a financial allowance,’ says Sardar V. Harcharan Singh of the Malaysian Gurdwaras Council (MGC)

The stringent laws on religious conversion involving Islam have a major impact in cases of inter-marriage. Muslims cannot marry non-Muslims in practice. Although there is an exception for Muslim men to marry ‘Kitabiyah’ (people of the book), the definition of a ‘Kitabiyah’ in Malaysia is almost impossible to prove (where for example a woman must prove she is Christian  and her ancestors were Christian before the prophethood of Muhammad). A non-Muslim must therefore convert to Islam to marry a Muslim.

Muslims marry under Shariah law, while non-Muslims marry under common law. Another problem that has arisen is in cases where one spouse in a non-Muslim marriage converts to Islam. The Islamic religious officials argue that infant children in such a marriage are also automatically converted to Islam and the non-Muslim spouse loses his or her rights to guardianship and custody of the children. As under Muslim law a man can have up to four wives it is not uncommon for non-Muslim men to convert to Islam to be able to marry for a second time without divorcing their first wife. Although minority rights activists argue that such marriages are bigamous and contrary to the law, no prosecutions have ever been made.

According to information provided by MCCBCHST, in May, 2006, Saravanan Thangatoray, who had for some time been estranged from his wife Subashini,  told her that he had converted to Islam. He told her she could have nothing more to do with her elder child, who was just three years old and took the child into his custody. Despite being married under civil law, Subashini’s husband applied for a dissolution of their Hindu marriage in an Islamic court.

The High Court, the Court of Appeal and the Federal Court all refused Subashini a substantive injunction to stop the Islamic court proceedings. This effectively forced her to deal with the Islamic court even though she was not a Muslim. The Courts also held that the consent of only one parent was necessary to convert a child to Islam.

‘The Constitution says Sharia court has jurisdiction only over people who profess Islam. Sharia court is under the law inferior to the High Court, but because of their religious role they make it in a way that they are higher,’ Sardar Jagir Singh of the Malaysian Gurdwaras Council (MGC) says.

In 2009 the government issued a policy statement against child conversions. This policy statement has not been translated into law, and in reality, minority rights activists say, infant children are still being unilaterally converted to Islam by only one parent without the other’s consent or knowledge.

‘How can religion claim exclusivity of words’

In the 80’s legislation was passed banning the use by non-Muslims of several words considered Islamic. This included the reference to God commonly used by Muslims, which is ‘Allah’. However, the equivalent word for God in the Malay language (which is also the official national language of the country) is also Allah.

In 2009, there were violent attacks on churches over the usage of the term ‘Allah’ after a High Court ruling that the Catholic Church could use the term in the Malay language version of their newsletter, distributed only to Catholics. Several Bibles published in the Malay language were seized by Malaysian customs authorities. Earlier in 2011, the Malaysian authorities announced that they would finally release the Bibles.

Because of the violence, the Catholic Church came to an agreement not to use the term until the appellate courts had dealt with the matter. However, the discriminatory effect of those laws affect other religions such as Sikhs, which also refers to God as ‘Allah’.  According to MCCBCHST  there are at least 30 other countries in the world where the world Allah is used by both Christians and Muslims.

‘How can any religion claim exclusivity of words? It is a freedom of expression issue,’ says Reverend Dr. Thomas Philips.

Malaysia has also imposed restrictions on building places of worship. While a mosque can be built in any neighbourhood – Muslim or non-Muslim – any other religious place of worship can not be built within 100 meters of a Muslim neighbourhood. There are also other regulations such as; the place of worship cannot be above a certain height and cannot resemble a mosque. The latter rule again affects the Sikh community, which builds domes for their places of worship.

All across Malaysian towns and cities there are many non-Muslim places of religious worship that can be found. However, for new places of worship being built, activists say, the procedures and processes to build is getting tougher causing delays and resulting in some projects being abandoned.

Non-Muslim religious leaders in Malaysia are not asking for any special privileges or protection. They are simply asking not to be persecuted or discriminated against because of their religious and racial differences. What they ask for is not something new, it is what the founders of Malaysia envisioned when the country’s Constitution was written.

Article 3(1) of the Constitution says that the religion of the Federation is Islam, but provides that ‘other religions may be practised in peace and harmony in any part of the Federation.’ Article 8 (1) provides for equality before the law for all persons. Article 11(1) gives every person the right to profess and practice his or her religion.

Religious leaders such as Fr. Phillips simply ask that these constitutional provisions be respected and upheld.

Religious leaders who participated in the discussion:

Filed Under: Asia and Oceania, Malaysia