Ethiopia paints two remarkable but contrasting images before the global eye. On one side we see an independent state, a cradle for human civilization. On the other, we see a state struggling to shrug off poverty, that disgraceful consequence of underdevelopment, poor governance and conflict. 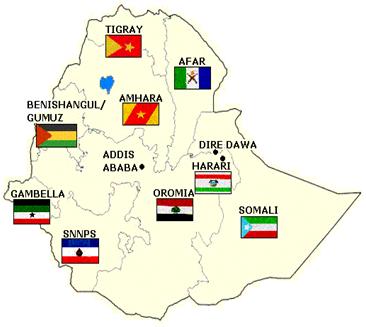 For the first time, the Meles Zenawi regime officially introduced a multi-party democracy, ethnic federalism and a market economy in a move to curb a history of political, social and economic injustice in Ethiopia. But the reality is very different. Two decades down the road there are glaring facts that show that Zenawi’s vision has done more harm than good to the wider population of Ethiopia, while only benefitting the few in power. The institutionalisation of ethnic politics and ill-conceived ethnic federalism in Ethiopia has mainly served to weaken critical dissent against the state and secure TPLF’s indefinite grip on power.

Oxford Poverty and Human Development Initiative, a poverty index informed by Amartya Sen’s capability approach, ranked Ethiopia the second poorest country in the world in 2014. However, relentless state-sponsored media has manipulated the public into believing there has been an economic boom, an advancement of social welfare and an improved political environment in Ethiopia since 1991. This stands in contrast to the country’s high unemployment, income disparity and political impasse. Though huge infrastructural developments are being witnessed, Ethiopia’s structure of governance continually reignites dormant conflicts between different socio-linguistic communities in the country, impairing cooperation and provoking mistrust among the population.

Addis Ababa is the country’s capital city, financial hub and main gateway to the outside world. ‘Shagar’ (the unofficial name for Addis Ababa) hosts the African Union headquarters and has increasingly attracted international summits.

Addis Ababa is encircled by predominantly ethnic Oromo-inhabited areas; Lagatafo, Sululta, Sabata, Holota and Dukam. For the minority communities in these areas surrounding Ethiopia’s capital, agriculture and rearing livestock is their primary economic activity. Their land is at the centre of their livelihoods, yet they do not have control over it.

In Ethiopia, land is the property of the state, and, alarmingly, people are losing their land to state-directed labour-intensive agriculture, land investment and state land grabbing. The farmers are often excluded from any business concerning their land in the name of ‘development’. The government brushes away the grave concerns of the local farmers, explaining that their actions are necessary for development.

Urbanisation and urban development are growing phenomena and Addis Ababa is no exception. Therefore, it is rational for the government of Ethiopia to develop a proper plan to address stakeholders’ political, economic, social, and environmental interests and thus to ensure sustainable urban development.

Stakeholders from the government and international organisations held a meeting in June 2013 at Adama town and indicated ‘Ethiopia’s interest’ in centralising the country and integrating the economic and social activities of Addis Ababa with its surroundings (Oromia Special Zone) by subtly bypassing the 1995 constitution (which clearly demarcates Oromia from Addis Ababa and observes the ‘special interest of the state of Oromia with respect to supply of services or the utilization of resources or administrative matters’). After being recommended by regional officials and experts from the African Union and UN, the draft plan has only to be approved by the project board and the Addis Ababa City cabinet in order to become effective.

Determined to push its Master Plan forward, the government of Ethiopia claimed it would improve the socio-economic conditions of Addis Ababa and Oromia Special Zone residents. Like most plans which sound good on paper, this one promises ‘to ensure the placement and exercise of a proper industrial waste output management system, to acquire designated industrial zones, and to decongest and coordinate public services for the ever rising city population’.

In April this year, officials from Oromia Special Zone and Addis Ababa City Administration met for an open discussion on the proposed Master Plan in Adama town. The discussion centred on constitutionality and development ethics, and whether moral and ethical guidelines will enter into the Master Plan. However, there is much pressure from federal government to see the plan effectuated.

If implemented, the plan would incorporate Sululta, Bishoftu, Sabata Dukem, Holeta and Ambo, bringing 1.1 million hectares of land under Addis Ababa City Administration and thus endangering the livelihoods of tens of thousands of ethnic Oromo farmers who regard the plan as ‘illegitimate’ and ‘unconstitutional’. They fear that an expansion of Addis Ababa will erode Oromo-inhabited areas, compromising the social setup and diminishing Oromo identity. Proponents of this first view, therefore demand that the Master Plan uphold the constitution, which stipulates that the people of Ethiopia must be at the centre of their own development process, by facilitating free, prior and informed consent, as well as genuine consultation with and adequate compensation for Oromo whose agricultural land is to be consumed by the State.

The Ethnic Oromo Protest and its Achievement

The discussion on the Master Plan at Adama town was partially reported on and broadcast by Oromia’s regional state-owned television station. Footage of a participant’s challenge to the ethical intentions of the plan was circulated on social media and kick-started a protest by Oromo students whose confidence in TPLF had already been damaged by its lack of transparency in its development project.

The ethnic Oromo student protest, which mainly adopted ‘the constitutionalist perspective’, was quite peaceful at first, implicating TPLF for its neglect of development ethics in Ethiopia. However, over time it took a radical course as unclear leadership, ambiguous objectives and ethnic resentment sparked deadly protest.

The violence of the protest meant that Oromo students failed to win either the sympathy of fellow Ethiopians or international support. Ultimately, the peaceful protest which was sabotaged by the secessionists’ political extremism resulted in unnecessary loss of life and property, ethnic strife and the expulsion of Oromo students from various universities.

However, the failed protest taught ethnic Oromos an important lesson. It had clearly indicated the need for ethnic Oromos to refine and clarify their concerns and tailor their demands to Ethiopia’s social and political context. It demonstrated a huge gap in public knowledge of the regime in Ethiopia and its specific failures. It is part of a trial-and-error process whereby Oromo activists attempt to show a constructive attitude, non-violent behaviour and consideration of the wider national context, and to propose a framework of governance superior to the existing ethnocentric regime in Ethiopia.

Ethnic Oromo farmers in Addis Ababa are not the only minority group affected by Ethiopia’s centralised land policy, arbitrary ethnic federalism and unethical development projects across the country. Omo valley communities are threatened in the southern part of the country; there are unheard voices on land investments in Gambella; there is continued unlawful eviction of ethnic Amhars from southern, central and western parts of the country; and land and water grabs have a negative impact on pastoral communities.

What should the Government and Oromo activists do?

The government have all the necessary means and authority to circumvent the looming threats to minority groups in Ethiopia. Its intentions in developing the Master Plan may have been good, but the approach employed in the planning process definitely received a poor welcome from low-ranking OPDO officials, the larger middle-income Oromo population and Oromo university students. In the short-term, therefore, the government should address the ethical dimensions of the Plan by holding genuine consultations leading to informed consent and adequate compensation for evicted farmers.

The government must also apologise and take responsibility for its brutality during the protests where dozens of young Oromo university students were shot dead. The government must learn to bear the costs of being transparent rather than spending millions of taxpayers’ money in lobbying foreign firms to undermine dissenting voices in an attempt to legitimise its half-baked developmental undertakings.

In the long term, Ethiopian technocrats need to work to harmonise a current mismatch between national resource governance and awkward ethnic federalism. This area of conflict must be given proper attention sooner rather than later before it deteriorates beyond repair.

Except for a few powerful individuals, the population at large are the victims of poor governance in Ethiopia. Ethiopians themselves are better equipped to effect change than foreign embassies or institutions. Therefore, ethnic Oromo activists, especially in the Diaspora, should resolve polarising issues and animosity against particular social groups and should instead tackle the specific policy problems in Ethiopia while bringing issues forth in a national context. To this end, the ethnic Oromo activists must distance themselves from unhelpful attitudes of hate, resentment and vengeance. Equally, protesters must detach themselves from radical and anti-Ethiopia groups which only serve to damage solidarity between Ethiopians and to cause acts of inhumanity.