MRG warns that community land rights are under threat in Uvinje, Tanzania 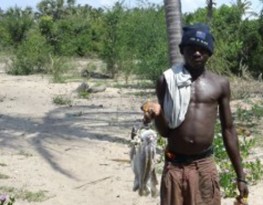 Minority Rights Group International (MRG) calls for proper and transparent procedures to be followed with regard to the people of the coastal fishing community of Uvinje in Tanzania by the Tanzania National Parks Authority (TANAPA). At stake is the future of a small community of 21 households and a total population of 130 people.

According to persons acting on behalf of the Uvinje community, the government is planning to compensate wrongful claimants of Uvinje lands from 17 February 2015, in order to justify the eviction of the rightful owners. Eye-witnesses have spotted the recent arrival of vehicles with these claimants at the TANAPA offices. Their claim is hotly disputed by the genuine Uvinje villagers, who fear that the compensation will lead to their own eviction.

‘This situation is extremely concerning as, yet again, the Tanzanian government appears to be failing to recognise the legal rights of landowners in favour of seemingly powerful tourism industry interests,’ says Lucy Claridge, MRG’s Head of Law.

In the 1960s, Saadani village, including its sub-village Uvinje, invited the Wildlife Division to help them conserve the wildlife being indiscriminately killed in their area by outsiders. A partnership emerged, and Saadani Game Reserve was officially gazetted in 1974 with the full support of Saadani and Uvinje village, which willingly gave up more than 50 per cent of its land for the Game Reserve. In return, the community was promised the retention in perpetuity of the coastal areas where their main villages, including Uvinje, are situated. The Wildlife Department subsequently laid down an 8 km line of concrete beacons to establish the precise boundary between the land of the village of Uvinje and the Game Reserve.

In fact, somehow the original boundaries instead were shifted to include the totality of Uvinje and Porokanya, Saadani’s two main coastal sub-villages, as well as part of the Saadani village centre. The District and other authorities gave their approval, unaware that the original boundaries of the Game Reserve at Saadani village had been changed. Once village leaders became aware that TANAPA had unilaterally redrawn the boundaries, they sent numerous queries and protests to higher authorities, but the matter was never resolved. Saadani National Park, with TANAPA’s preferred boundaries, was gazetted by the Tanzanian Parliament in 2005.

Three different independent research reports confirm what elders and elected leaders of Uvinje and Saadani have been stating all along: that they have never been within the Game Reserve or the National Park.

‘Presumably, under Tanzanian law TANAPA has no authority to evict people from a National Park if they are not actually in a National Park,’ Claridge adds. ‘The original Saadani Game Reserve was an early model of community involvement in conservation. The fact that the Uvinje villagers are now at risk of eviction is particularly disturbing.’

Minority Rights Group International is a non-governmental organization working to secure the rights of ethnic, religious and linguistic minorities and indigenous peoples worldwide. You can visit our website http://minorityrights.org/ for more information