A Peer’s Struggle for Justice 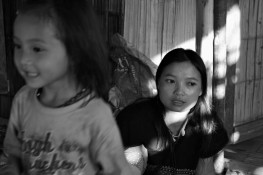 Konstantina Vasileva, a journalist from Bulgaria, reports back from a training in Thailand for EU13 journalists organised as part of MRG’s Minority Realities in the News programme.

Assumptions and stereotypes are the death of a genuine human story. Aware of this, and armed with what I think is an “objective viewpoint,” I embark on my field trip to Kaeng Krachan National Park, Thailand, with a group of fellow photographers, journalists and documentary makers.

I find how deceitful my objectivity had been the second I walk into the home of Mue Naw, the widow of Karen activist Porlachee “Billy” Rakchongcharoen, who went missing last spring.

Frankly, in this situation I had been expecting a mournful widow, crushed under the weight of her personal and social burden, a mother of five with her husband missing, a victim of social discrimination. I could not have been more wrong.

I cannot vouch for her internal state, but on the outside Mue Naw is a paragon of tranquility, composure and strength. She does not look like a victim on the losing side of a battle with the authorities. She tells us the story of the last time she saw Billy whilst calmly directing her young son to his afternoon snack of milk, and welcoming her older girls home from school. We learn how she met her husband while she breastfeeds her youngest one and the uninhibited calmness of her actions and her words is in striking contrast to the emotionally invasive inquiry into her husband’s disappearance.

Both she and Billy are Thai Karen, indigenous peoples with century-long traditions in rice production, shifting cultivation and honey gathering. Their community is deeply connected to their land and traditional ways of living. This creates a surge of lands right issues with the Thai government, as mountain regions and forests are both an attractive source of resources for commercial logging, and a viable option for clearing agricultural land for cash crops. What’s more, Kaeng Krachan (where Billy disappeared) is the largest national park in Thailand (with an area of almost 3000 km2) and in 2011 the Ministry of National Resources and the Environment in Thailand submitted an application to turn the park into a UNESCO World Heritage site.

Although such recognition would mean a lot for the conservation of animal and plant species in Kaeng Krachan, it would essentially signal an eviction notice for all members of the Karen community within the park. There is currently no dialogue between the government and the Karen on this issue, and the community’s right to free, prior and informed consent is largely neglected, despite recent constitutional proposals to grant the rights to the indigenous people of Thailand.

What struck me mid-story is that Mue Naw is 28. I had just turned 28 myself a few days before leaving for Thailand, and I could not help being overwhelmed. Here we are, both women and peers in age, yet leading such different lives. I realize how meaningless my daily burdens are compared to raising five children in a country strongly biased against your own community; outliving a (most probably dead) husband, struggling with pressure from the authorities and the need to protect your communal and cultural roots.

Human rights issues can sometimes be quite abstract. Even when you are interested in the subject it is still somebody else’s story, somewhere else. But when you face such a person and your empathy discovers all the parallels, along with all the divisions, the emotional impact of realization is much stronger. You are no longer intellectually imagining the situation of another human being under intense pressure; you suddenly realize it could have been you, in another place or another time. And that is an intense place to be and a deeply impactful change of perspective.

I was deeply impressed with Mue Naw’s empowered composure, with her refusal to “let things be” and determination to go on trying to make her husband’s story heard. Neighbours had said to her “Why don’t you stop talking about it? Who would take care of your children if something happens to you.” Concern or threat? These words sent a chill down my spine, but did not seem to take her focus away from what she believed was the right thing to do. And, doing the right thing could bring a change.