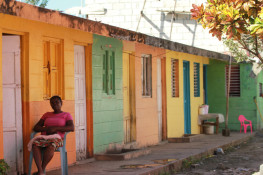 Say My Name documents the work of MRG’s Street Theatre programme in addressing these issues, following professional and minority actors as they work together to combat discrimination and racism in four countries.

In Kenya, Rwanda, Botswana and the Dominican Republic, we see how street theatre is used to educate and inspire communities with performances in public spaces.

Featuring interviews with actors, directors, and audience members, and footage of performances from across the globe, Say My Name charts how Street Theatre works with minority and majority groups to unite communities against prejudice.