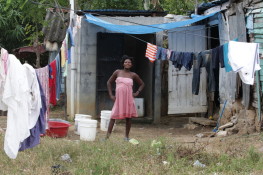 Hundreds of thousands of Haitian migrants, as well as Dominicans of Haitian  descent, face imminent risk of deportation from the country they call home. 17th June 2015 was the deadline for them to register for the country’s regularisation plan, giving them 45 days to complete their applications, whilst those who did not register in time face being deported.

The plan affects the Dominican Republic’s estimated 500,000 undocumented immigrants, leaving an uncertain future for many on the island who have wrestled with Dominican bureaucracy for a chance to stay.

According to the most up to date government figures, 288,466 people have registered. Those who are deemed eligible will be able to obtain temporary migrant status. The process of registration, however, has not been easy. Even when attempting to acquire the correct documentation, the obstacles faced by Dominico-Haitians have been extreme. For example, one man MRG spoke to spent approximately 13, 000 pesos (almost $300) on paperwork alone. He went three times to the registration office, each time waiting for more than five hours, and had to sleep there to obtain a place in the queue, only to be told that the requirements had changed. He even paid lawyers for documents which he later learned were no longer necessary.

It is important to note that many Dominico-Haitians simply cannot afford to begin this tortuous process. Some say they would prefer to use their income to feed their families rather than spend all their money on a procedure which is unlikely to improve their precarious status.

President Danilo Medina has stated there will be no mass deportations to Haiti and that people with uncompleted registrations have 45 days (starting on 18th June 2015) to submit all documents required. However, local news report that detention centres are being expanded, and migration police squads are readying to identify illegal immigrants in the country.

This regularisation plan (Plan Nacional de Regularizacion de Extranjeros) was supposedly the Government’s solution for migrants to gain legal status in the Dominican Republic. However, MRG feels the move is rooted in systematic discrimination in the country towards darker-skinned Dominicans.

For more information about the background to this situation, see MRG’s August 2014 press release.