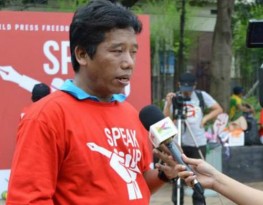 I am writing to you on behalf of TAPOL and the undersigned organisations, all of whom are deeply concerned about the absence of free and open access to the Indonesian provinces of Papua and West Papua (henceforth: Papua) for international journalists, humanitarian organisations and human rights observers. The media blackout in Papua denies the Papuan people the right to have their voices heard and allows human rights violations such as killings, torture and arbitrary arrests to continue with impunity.

For more than 50 years, access for foreign journalists seeking to report on Papua has been severely restricted. Those who have entered Papua on tourist visas have been deported, arrested and even imprisoned. Just last year, two French journalists were sentenced to 11 weeks in detention under immigration charges. According to the Jayapura branch of Indonesia’s Alliance of Independent Journalists (Aliansi Jurnalis Independen, AJI), in recent years journalists from Czech Republic, France and the Netherlands have been deported for reporting on peaceful political events in Papua.

At the local level, violence and intimidation of national and local journalists makes independent journalism a high-risk activity. On 30 July 2010, journalist Mr Ardiansyah Matra’is was found dead after receiving repeated threats from the military while he investigated illegal logging. On 24 August 2010, Mr Musa Kondorura of radio KBR68H was attacked by two agents from the State Intelligence Agency (Badan Intelijen Negara, BIN). On 3 March 2011 Mr Banjir Ambarita, a journalist with Jakarta Globe and Bintang Papua was attacked and stabbed after reporting on a police rape case which resulted in the resignation of senior police official Mr Imam Setiawan. In 2011, AJI reportedly recorded 7 cases of violence and intimidation against journalists. In 2012 the number of recorded cases reportedly rose to 12. In July 2013 the house of a local journalist for Majalah Selangkah, a critical independent news site, was raided by unknown persons who ransacked the place.

There are ongoing reports of serious human rights violations including torture, enforced disappearances, murder, ill-treatment, cruel or degrading treatment, excessive use of force and arbitrary arrest of indigenous Papuans by Indonesian security forces. In August last year, an activist with the West Papua National Committee (Komite Nasional Papua Barat, KNPB) was kidnapped, tortured, murdered and his body dumped in a river. There have been no police investigations and very few media reports on this case. Just last month, at least six people were shot and 21 others arrested by Papuan National Police (Polda Papua) and Mobile Brigade

The de-facto ban on foreign journalists, NGOs and humanitarian organisations contributes to the isolation of local journalists, and makes independent investigation and corroboration virtually impossible. This media blackout makes it extremely difficult to hold perpetrators of human rights violations to account, allowing them to continue to act with impunity.

Over the years, international humanitarian agencies and non-governmental organisations have been pressured to close their field offices and leave Papua, denying indigenous Papuans access to vital support and resources for development, health and education. The failure of the local government to effectively address the HIV/AIDS pandemic in Papua is just one example of how the restrictions on access are not only repressive but are proving lethal, particularly to the indigenous population.

Access for UN human rights observers has been closed for eight years. In May 2012, Indonesia accepted a recommendation of the Universal Periodic Review to issue an invitation to the Special Rapporteur on Freedom of Expression. A visit by Mr Frank La Rue, the previous mandate holder, was scheduled for January 2013. However, this visit was unilaterally cancelled and indefinitely postponed by Indonesia, allegedly because of the Special Rapporteur’s wish to visit Papua and Maluku, among others.

International journalists and non-governmental organisations seeking to visit Papua are currently required to undergo a stringent visa application process involving the unanimous approval of 18 separate government agencies known as the Clearing House committee. This bureaucratic and time-consuming process deters journalists from attempting to visit West Papua, or encourages them to choose to travel to Papua on a tourist visa. The involvement of agencies such as BIN in this vetting process begs the question: What is Indonesia hiding in West Papua?

Access for journalists, humanitarian agencies and human rights observers is often denied or restricted on the grounds of security, with authorities stating that their priority is to protect foreigners from dangerous armed rebels. We respectfully submit that journalists reporting on conflict areas accept such potential risks. As journalists they understand the risks involved in fulfilling their duty to witness and tell the stories of people facing violence and injustice, and their efforts to secure peace and justice.

Mr President, during your presidential campaign in June last year, you stated that there was nothing to hide in Papua and promised to open the region. We believe that free and open access to Papua for international journalists, humanitarian agencies and human rights organisations will serve to protect and promote the human rights of indigenous Papuans, and all those who call the Land of Papua their home. The end of restrictions on access to Papua will not only be in accordance with Indonesia’s international obligations but will also strengthen Indonesia’s standing as a democratic nation. We therefore urge the Government of Indonesia to:

We are grateful for your attention to these matters and look forward to your response.

Filed Under: Asia and Oceania