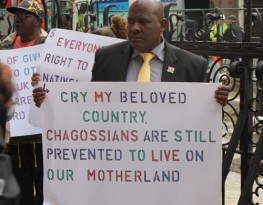 A United Nations ruling, which finds that the UK government acted illegally when it created the world’s largest marine reserve around the Chagos Islands, is a welcome step forward in the decades- long struggle of the Chagossian people to return to their homelands, says Minority Rights Group International (MRG).

The Permanent Court of Arbitration at The Hague held that in declaring the Chagos Marine Protection Area (MPA) in 2010, the UK had breached its obligations under the 1982 United Nations Convention on the Law of the Sea. The Court found that in creating the MPA, the UK had failed to adequately consult nearby Mauritius, and illegally deprived it of fishing rights.

‘The Permanent Court of Arbitration clearly states that the UK government can no longer do whatever it wishes with the Chagos Islands,’ notes Carl Soderbergh, MRG’s Director of Policy and Communications.

A 2014 MRG report says that the creation of the MPA, and the subsequent banning of commercial fishing in its waters, effectively barred Islanders from returning to their homes. Under international law, the Chagossians have a right to return to their homeland, unless such return is not feasible, in which case they should be offered appropriate compensation.

A government commissioned report on the feasibility of resettlement, published in February, concluded that there were no legal obstacles to resettlement of the Chagossians. However, the UK government has postponed any discussion of the study until the meeting of the new Parliament after the May 2015 General Election, a move deemed ‘a terrible failure’ by the UK Chagos Support Association.

‘Ultimately, the creation of the MPA was a cynical move to prevent the return of the Chagossians, and this judgment has clarified issues of sovereignty over the Islands’ says Soderbergh. ‘However, and more importantly, the UK government must now stop the delaying tactics, move forward on the feasibility study and finally allow the Chagossians to return home should they so wish.’

The Chagos Islands lie at the heart of the British Indian Ocean Territory, established in 1965 by the UK out of islands claimed by Mauritius, a former colony which gained independence in 1968. The Islands’ original inhabitants were evicted in the 1970s to make way for a US air base on the island of Diego Garcia after a deal was struck between the UK and US governments. The UK has promised to return the Chagos Islands to Mauritius when they are no longer needed for defence purposes, whilst the UK-US lease on Diego Garcia expires at the end of 2016.

The Islanders’ struggle to return home has led to a protracted legal battle, both in the UK and at the European Court of Human Rights. MRG has provided legal support to the Chagossians at key moments in their struggle.