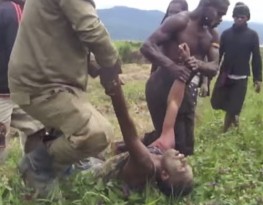 (London, UK) – New video footage showing the bloody aftermath of the ‘Paniai massacre’ in West Papua highlights the urgent need for Indonesia to hold an independent and transparent investigation into the tragedy, Minority Rights Group International (MRG) said on Thursday.

In December 2014 four unarmed Papuan teenagers were killed and 17 more Papuans were injured when the Indonesian army and police opened fire on a group of peaceful protestors in Paniai. They had gathered to protest an earlier incident of violence by the Indonesian security forces.

The four-minute video, shot by citizen journalists and released publicly for the first time today, includes first-hand testimony from survivors of the massacre as well as graphic footage taken in the immediate aftermath.

‘This film gives a disturbing insight into the Indonesian military’s casual disregard for the lives of Indigenous Papuans,’ said Esther Cann from TAPOL. ‘The protestors had gathered peacefully to challenge the beating of a young boy the previous day by Indonesian security forces and they were greeted with bullets.’

Both the national human rights commission and the Indonesian police have launched investigations into the incident, known as the ‘Paniai massacre’. However the police — who initially blamed the shooting on armed ethnic Papuan rebels — have been accused of stymying the investigation.

The massacre is one of the worst acts of state violence in Indonesia in years, casting doubt on President Joko Widodo’s commitment to human rights in the region. More than six months after President Widodo was sworn into office pledging to ‘give special attention to West Papua,’ there has been little change on the ground.

Despite recent efforts by Jakarta to improve delivery of basic services like health and education, the Indonesian government continues to crack down on peaceful protestors, silence critical civil society voices and shut out members of the international media. Reports of extrajudicial killings, torture, arbitrary arrests and detention of indigenous activists are common.

‘President Widodo has left a trail of broken promises on West Papua,’ said Claire Thomas, Deputy Director of MRG. ‘If he is serious about implementing political reform in Indonesia, he needs to ensure that the military is open to public scrutiny and state actors perpetrating abuses against Papuans are held to account. The investigation into the Paniai massacre will be a crucial test of Widodo’s commitment to human rights in West Papua.’

Since the annexation of Papua to Indonesia in May 1963, the human rights of indigenous Papuans has been under sustained attack. Widespread violations – including extra-judicial killings, torture, disappearances, and arbitrary arrests and detentions – have been consistently perpetrated by Indonesian security forces. The resource-rich region has been systematically exploited by Indonesian and international business interests at the cost of climate change and the indigenous population. Thousands of indigenous people have been evicted from their lands as a result of large-scale development projects implemented without obtaining their free, prior and informed consent.

Indonesia is currently serving its fourth consecutive term as a member of the UN’s Human Rights Council.

Filed Under: Asia and Oceania