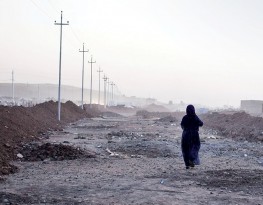 Minority Rights Group International (MRG) and the Ceasefire Centre for Civilian Rights, in cooperation with the Cairo Institute for Human Rights Studies, hosted a side event on violence against women and girls in the Iraq conflict on 24 June 2015 during the 29th session of the United Nations Human Rights Council in Geneva.

The event featured a special video message from Ms. Zainab Hawa Bangura, UN Special Representative of the Secretary General on Sexual Violence in Conflict. Ms. Bangura described her recent visit to Iraq and Syria, when she met with victims of conflict-related sexual violence, especially women and girls from the Yezidi minority. She described the shock she felt upon hearing their stories, including one girl who had been subjected to forced marriage 22 times in four years.

Ms. Miriam Puttick, Civilian Rights Officer at MRG/ Ceasefire presented the findings of her recently released report ‘No Place to Turn’. According to the report, approximately 14,000 women have been killed in armed conflict across Iraq since 2003, in addition to thousands abducted or trafficked, and millions displaced.

Video testimony from a Yezidi girl victim (identity withheld) recounted her three-month long ordeal as one of 73 members of her family held in ISIS captivity. She recounted being separated from her siblings and transferred along with one hundred others from Mosul to Ba’aj, where girls as young as seven were subjected to horrifying violations including rape and forced marriages to ISIS fighters.

The Iraqi Ambassador, H.E. Dr Mohammad Sabir Ismail, noted with concern the rise in gender-based violence in Iraq as a result of the activities of ISIS.

Finally, Ms. Nareen Shammo, a Yezidi journalist and activist who has been in communication with abducted women and girls and their families since August 2014, called on the international community to increase their efforts to secure the release of the remaining captives and provide support to the victims.

The side event was organised by Minority Rights Group International, the Ceasefire Centre for Civilian Rights, and the Cairo Institute for Human Rights Studies, with financial support from the European Union.