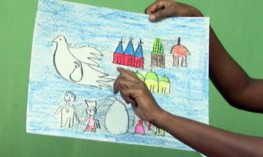 Minority women continue to grapple with the legacy of Sri Lanka’s civil conflict six years after its bloody end, according to a pioneering new project by Minority Rights Group International (MRG).

Following the publication of a landmark UN report on Wednesday urging the creation of a hybrid special court to investigate war crimes committed by both sides during Sri Lanka’s 26-year war, reconciliation and accountability are high on the global agenda. But there is still little agreement on what that really means, particularly for those most affected by the conflict, including Sri Lanka’s minority women.

Their words and drawings show that while some women are cautiously optimistic about the future, many are still unable to move on, finding it difficult to trust in the authorities and feel safe in their homes. For a large majority, the effects of conflict are still being felt, while justice, security and development remain unrealized. Over 40,000 ethnic Tamils are estimated to have been killed in the final stages of the war in 2009.

“In many ways minority women have borne the brunt of Sri Lanka’s civil war, enduring decades of sexual violence, insecurity and economic isolation,” said Claire Thomas, Deputy Director of MRG. “Distrust of the authorities still runs deep among affected communities. Now it is imperative that these women get a platform to share their experiences and contribute to the country’s dialogue on transitional justice. For many it will be the only way to begin healing the wounds of the past.”

Despite growing debate and discussion on reconciliation in Sri Lanka, Tamil women, including Christians, Hindus and Muslims, continue to be sidelined and their perspectives have not been fully integrated into mainstream discourse.

Years after the formal end of the conflict, many women still face chronic insecurity, protracted displacement, limited livelihood options and the continued threat of sexual violence. A large number, having been widowed during the war, are now the sole breadwinners for their families. Thousands more are waiting for news about loved ones who vanished.

“I did not use my favourite colour green in this picture because our situation is not green now. It is so very challenging,” a 24-year-old ethnic Tamil woman from Mannar District told MRG. Her brother was kidnapped in 2008 and she has not seen him since. “We still have hopes that my brother is alive.”

On Monday, Sri Lanka’s Foreign Minister Mangala Samaraweera vowed to confront the country’s brutal past by establishing a Truth and Reconciliation Commission in a historic speech at the UN Human Rights Council in Geneva. It marks the first time Sri Lanka’s leadership has taken responsibility for mistakes in the handling of previous inquiries into allegations of war crimes implicating former President Mahinda Rajapaksa, who led the final offensive against ethnic Tamils in 2009. Rajapaksa was ousted as President earlier this year.

“While we welcome Sri Lanka’s commitment to investigate war-time abuses and ongoing human rights abuses perpetrated by the former government, words need to be followed up by concrete action,” added Thomas. “Meaningful international participation is necessary to send a clear signal that this time the government is not just making empty promises and really does mean to confront the past in ways that allow healing to start and the Sri Lankan nation in all its diversity to move on.”

The UN has identified patterns of grave violations carried out in Sri Lanka between 2002 and 2011, suggesting that war crimes and crimes against humanity were most likely committed by both sides of the conflict. The report sets out a clear mandate for international judges, prosecutors, lawyers and investigators to help establish a hybrid special court – similar to the one set up in Cambodia – to hold perpetrators to account.