A Step towards Justice: Current accountability options for crimes under international law committed in Syria 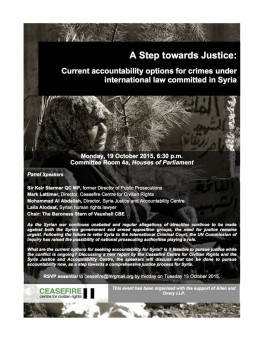 Monday, 19 October 2015, 6:30 p.m.
Committee Room 4a, Houses of Parliament
Panel Speakers:
Chair: The Baroness Stern of Vauxhall CBE
As the Syrian war continues unabated and regular allegations of atrocities continue to be made against both the Syrian government and armed opposition groups, the need for justice remains urgent. Following the failure to refer Syria to the International Criminal Court, the UN Commission of Inquiry has raised the possibility of national prosecuting authorities playing a role.
What are the current options for seeking accountability for Syria? Is it feasible to pursue justice while the conflict is ongoing? Discussing a new report by the Ceasefire Centre for Civilian Rights and the Syria Justice and Accountability Centre, the speakers will discuss what can be done to pursue accountability now, as a step towards a comprehensive justice process for Syria.
RSVP essential to ceasefire@minorityrights.org
This event has been organised by the Ceasefire Centre for Civilian Rights with the support of Allen & Overy LLP.
Filed Under: Conflict, Events, Middle East, Syria