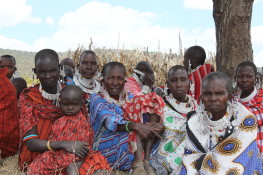 The land rights case was brought by the indigenous community against a subsidiary of a US-based safari company, and a government parastatal – Tanzania Breweries Limited (TBL) and Tanzania Conservation Limited (TCL) – claiming forceful and violent eviction from their ancestral land in Loliondo.

The Arusha-based Court ruled against the Maasai on all but one point. The community had asked the court to revoke the company’s land title, prevent TCL from converting the land’s designated use from pastoralism to tourism, and award damages for the injuries they have suffered due to their exclusion from the land. They alleged that TCL, together with local Tanzanian police and government officials, had conspired to illegally confiscate their land.

The Maasai, who live in the villages of Mondorosi, Sukenya and Soitsambu, also claimed their homes were burned, and that they had been beaten, detained, and shot at for trying to use the land and water at or near the contested land.

‘MRG is dismayed by this decision. It is a setback for not only for the Maasai, but for all indigenous peoples across Africa struggling to have their rights over traditionally-owned land recognised and respected,’ says Lucy Claridge, MRG’s Head of Law.

‘Although the community won on a minor point concerning an illegal transfer of part of the land, no damages were awarded and the conflict over land and resources remains. It is a significant defeat for the Maasai of Loliondo, who depend on raising and herding cattle in this harsh environment to earn their fragile living, and have had their main means of survival jeopardised by both international investors and their own government,’ adds Claridge.

‘We are tremendously dissatisfied with this judgment and intend to appeal it at the first opportunity. Based on the evidence at trial the court did not come to a fair decision, and this judgment only serves to cement the marginalisation of the Maasai in Ngorongoro in the name of conservation,’ say Wallace N. Kapaya and Rashid S. Rashid, Counsel for the Loliondo Maasai in court, and partners at KNRLegal in Arusha.

In the 1980s, TBL acquired 10,000 acres of land within what was then Soitsambu village, Maasai ancestral land, with the intention of wheat and barley cultivation. TBL failed to follow the required conditions, such as consulting with the landowners; neither did they offer any compensation for the land.

Out of the 10,000 acres it acquired, TBL only used about 700 for cultivation. As such, life continued as normal for the Maasai, who continued to use the land for grazing and watering their livestock.

They did so for a period of over 19 years without any disturbance, which led to the belief that the land belonged to them. However, in 2006, TBL sold the land to TCL – a Tanzanian incorporated company, run by an American owned safari company, Thomson Safaris.

The community started legal proceedings in 2010 against TBL and TCL before the local courts. This case was later dismissed in 2013 on purely technical grounds. The current lawsuit was initiated the same year.

Under international law, the Maasai have the right to give or withhold consent to proposed projects that may affect the lands they have lived on and used for years, and the natural resources within them.

States are under a duty to protect against human rights violations, including investigating and providing redress for any abuse. Private companies must avoid causing or contributing to adverse human rights impacts through their own activities, and address such impacts when they occur. Unfortunately, these duties had been ignored in this case, says MRG.

The Maasai are an indigenous, semi-nomadic people inhabiting East Africa. Their distinctive customs and dress are emblematic, and images of them are often used by the Tanzanian government to promote tourism in the country. MRG has been supporting these communities in their struggle since 2009.

For more information and to arrange interviews please contact: