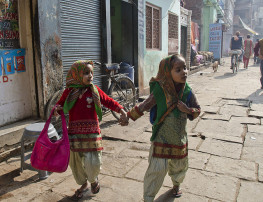 The British government must pressure Prime Minister Narendra Modi to protect the rights of minorities in India, Minority Rights Group International (MRG) said on the first day of his visit to London.

Religious tensions have reached a tipping point in India, where four Muslims were recently murdered for allegedly consuming or trading in beef – considered a crime in many states of the Hindu-majority country. Christians, Dalits and Sikhs have also found themselves growing targets of intolerance since Modi took office.

In late September, a Muslim man called Mohammad Akhlaq was battered to death by a mob in Dadri, Uttar Pradesh, after rumours spread that he had eaten beef, while his son was badly assaulted. Within weeks, three other men had been killed – one doused in petrol in Jammu and Kashmir, the second beaten to death in Himachal Pradesh and the third lynched in Manipur after allegedly stealing a calf.

‘The recent spree of anti-Muslim murders in India raises serious concerns about the government’s commitment to protect its minorities,’ said Carl Soderbergh, Director of Policy & Communications at MRG. ‘Since Prime Minister Modi took office, India has witnessed a disturbing surge in nationalist rhetoric and religious intolerance, while the government has turned a blind eye. Indeed, there are worrying signs that Modi’s government is exploiting communal tensions for political gain.’

The murders come at a time when the Modi government seeks to curb the beef industry, which is predominately run by the country’s Muslim minority. Rashtriya Swayamsevak Sangh (RSS) — a leading extremist nationalist group affiliated with the ruling Bhartiya Janata Party (BJP) — has publicly claimed that Hindu religious texts call for the killing of “sinners” who eat beef. The RSS has been accused of directly provoking communal violence across India.

A number of BJP party members have sought to downplay the severity of Akhlaq’s murder, while Modi – who has a history of Hindu nationalist activism – took over a week to publicly address the tragedy.

Minority rights activists note that communal tensions have flared in recent months, with several bouts of religious unrest gripping the country. India has seen a 24 per cent rise in communal violence since Modi took office, according to data released by the government in July.

India’s Sikh community led protests last month following reports that their holy book had been desecrated by Hindu nationalists. Meanwhile, two Dalit children were murdered in Faridabad in October, with the government coming under fire for failing to tackle intolerance more generally.

‘David Cameron must make it a priority to press Prime Minister Modi on his very worrying record on minority rights and the recent spike in hate crimes,’ added Soderbergh. ‘The United Kingdom has an obligation to speak up on behalf of India’s most marginalized communities – or the consequences could be deadly.’