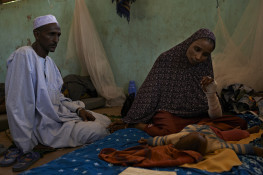 As Central African Republic (CAR) goes to the polls in December 2015, the electoral process must be free, fair and inclusive to address deep-rooted discrimination and prevent the country from plunging further into conflict and division, says Minority Rights Group International in its new report.

The report: ‘Central African Republic on the Eve of Elections: From Crisis to Reconciliation,’ investigates the root causes and impact of the civil conflict in CAR, as well as the nuances of what is often referred to as a religious struggle but which is rooted in a history of poor governance and tensions over access to resources.

Despite a long history of relative tolerance in the country, the outbreak of violence in CAR in 2013, involving anti-government armed groups known as Seleka (a predominantly Muslim rebel coalition) and anti-Balaka forces (Christian self-defense militias), has resulted in a tragic division of the country along sectarian fault lines, leaving an estimated 900,000 citizens either internally displaced or refugees in neighboring countries.

Heading into a referendum on the draft constitution on 13 December and then elections, the country is grappling with reintegrating and ensuring a safe return of citizens currently displaced within CAR or in neighboring countries like Cameroon, Chad, and Democratic Republic of Congo who are likely going to be disenfranchised.

‘Although being framed as a religious and ethnic conflict, the current violence is in fact a reflection of historical and systemic discrimination, poor governance and unequal access to natural resources,’ says Agnes Kabajuni, MRG Africa Office Manager, adding, ‘To ensure a stable, tolerant and diverse settlement, the electoral process must be seen to be truly inclusive for all the country’s citizens, including its minorities.’

Despite their apparently religious character, today anti-Balaka and ex-Seleka are widely reported to be involved in criminal activities, surviving by extorting revenue from civilian populations in areas under their control and blurring the line between sectarian fighting and criminal violence.

MRG’s Peoples under Threat survey, which seeks to identify those peoples or groups that are most under threat of genocide, mass killing or other systematic violent repression in 2015 showed Muslim minorities in CAR at the greatest risk of mass killings.

Particular attention, the report shows, must also be paid to the situation of minorities such as Mbororo and other semi-nomadic pastoralist groups, who often find themselves in conflict with sedentary communities because of their animal-herding lifestyles and competition for resources exacerbated by climate change.

‘Efforts at peace building and reconciliation must focus not on narrow sectarian solutions, but holistically include all the country’s communities as equal citizens, including minorities, refugees and the internally displaced,’ adds Kabajuni.

For more information, to receive an embargoed copy of the report or to arrange interviews please contact: