All Yemenis suffer reality of war, but burden of conflict heaviest on most vulnerable – new report 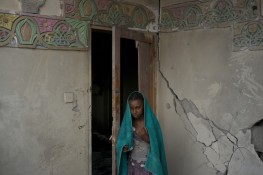 While all Yemenis are suffering the reality of war and the prospect of more violence, devastation and poverty, the burden of the current conflict is heaviest on the country’s most vulnerable, says a new Minority Rights Group International (MRG) report.

‘The international community, including the UN, has failed Yemen in many ways, but above all by turning a blind eye to the devastating humanitarian crisis and the conflict which is tearing an entire country, its population and social fabric apart,’ says Carl Soderbergh, MRG’s Director of Policy and Communications.

‘Unless an immediate cessation of hostilities takes place, civilians will continue to bear the brunt of this war. Without effective protection, some of Yemen’s minorities may well struggle for their very survival,’ he added.

The report, ‘Even war discriminates’: Yemen’s minorities, exiled at home, focuses on religious minorities and the rise of sectarianism, and looks into the situation of the little-known Muhamasheen community.

Although Yemen has very little history of sectarian tension, activists interviewed said that religious extremism is on the rise, and the threat of targeted violence between the Sunni Muslim majority and the country’s two main Shi’a Muslim sects has increased.

‘The rise in sectarian tensions, hate speech and targeted attacks on religious communities is of great concern, a sure sign of the long-term impact of this conflict on Yemeni society,’ says Rania El Rajji, author of the report.

‘While a great deal of attention should be focused on religious extremism, the international community should ensure that it is addressed with the best interests of the Yemeni people at heart, and away from global and regional counter-terrorism strategies,’ she added.

The future survival of Yemen’s smallest minorities is also in doubt. Existing patterns of discrimination before the outbreak of the war have been deepened by instability, violence and the humanitarian crisis, says the report.

The country’s once numerous Jewish community is down to just 83 members. The few who remain are facing the hardships of war, as all Yemenis are, but also the burden of having no freedoms, no means of subsistence, and live in fear of becoming the next scapegoat.

The war has had a devastating impact on the Muhamasheen, who suffer caste-based discrimination and fall outside of traditional tribal and societal structures. They mostly live in slum areas on the outskirts of cities, and many are unemployed or confined to menial jobs, such as garbage collection.

Muhamasheen live in cities most affected by the conflict, such as Aden, Taiz, Hodeida and Saada. Coalition airstrikes and heavy bombing have forced them to seek refuge elsewhere, yet their experience of displacement has been different from that of other Yemenis, as instead of being housed in public institutions and schools, they have tended to flee to open farmland, parks and public spaces, and have been largely left to their own devices.

Humanitarian organizations’ limited capacities, lack of access and inability to monitor aid distribution have further exacerbated the vulnerabilities of Muhamasheen. For instance, in the besieged city of Taiz, some of the aid destined for them has been diverted to other communities by local Sheikhs.

Since the onset of the Saudi-led military campaign in March 2015, the conflict in Yemen has resulted in more than 5,700 deaths and 27,000 people injured. 21.2 million Yemenis, around 82 per cent of the country’s population, are in need of humanitarian assistance, according to the latest UN figures.

While the death toll is based on estimates and does not represent the actual number of casualties, figures continue to rise as the conflict continues, especially since the recent breakdown of a ceasefire brokered between the warring parties in December 2015.

For further information or to arrange interviews, please contact us.