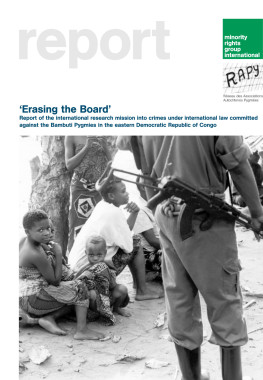 ‘Bemba stayed away from the battlefield and the scenes of his crimes,’ said Mark Lattimer, MRG’s Director. ‘But the ICC today made it clear that commanders cannot wash their hands of their responsibility.’

In addition to his culpability, as military commander, for three counts of war crimes and two counts of crimes against humanity in the Central African Republic, Bemba is also allegedly responsible for crimes against humanity committed in the Congo. In 2002-3 he unleashed a campaign of extermination against the local Bambuti Pygmy population, named Effacer le tableau (‘Erasing the Board’).

‘Bambuti communities in the Congo’s Ituri district were displaced en masse, fleeing rape and murder at the hands of Bemba’s MLC fighters,’ said Mr Lattimer, who led an investigation in 2004 into Bemba’s crimes in the Congo. ‘Pygmy women suffered horrific sexual violence and many Bambuti were threatened with cannibalism. Bemba’s many victims in the eastern Congo will sleep sounder tonight, knowing he will not return.’

Notes for editors: The report of the investigation mission into crimes under international law committed in the eastern Democratic Republic of Congo, ‘Erasing the Board’, is available here.

Filed Under: Democratic Republic of Congo