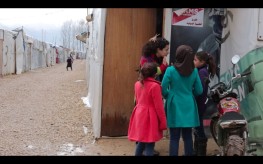 It is an unusual feeling to be humbled, amazed and inspired by someone’s work routine. It certainly means that person’s work is touching on deep and meaningful feelings and is more an adventure than a predictable and repetitive endeavour.

Juliana Tams from the Civic Forum Institute, MRG’s partner in the Drama, Diversity and Development programme (DDD) and I undoubtedly felt this way during our three days of work at the beginning of March with Sabine Choucair at the Bar Elias Syrian refugee camp in Bekaa valley, Lebanon. Sabine is a professional actor and clown, and she is recording refugees’ stories at the camp. She later edits these recordings in to short clips which magically give the listener the impression that the powerful story they are hearing is being told by a skilled storyteller. It takes up to a full day of work to edit just one 4 minute story.

These edited clips will be the basis of a street theatre show called The Caravan, during which the audio recordings will be accompanied by live performances and followed by debates on the situation of the Syrian refugees. This project is funded through the DDD project, and its objective is to bring the voices and stories of Syrian refugees into Lebanese public spaces in a humanizing and dynamic way.

The three days of work we shared with Sabine were devoted to storytelling workshops with teenagers and younger kids aged 8-12 years old. The approximately 50 children were separated in manageable groups based on age and the work started with activities designed to break the ice and create the needed trust between the kids and the team. The children were then encouraged to tell their dreams and share their emotions and stories through tales invented on the spot, or through simple theatrical games. It is a challenging and beautiful effort to engage with children whose families have fled war and who have been living for up to four years in a camp, with no hope to see their situation improve anytime soon. They are an extremely lively bunch, and they are ferociously eager to be heard and considered. It takes a professional like Sabine to channel and focus that energy and transform it into a story for the world to hear.

We went to Lebanon to follow up on a project, but we came back with a powerful feeling of love for the children, of respect for Sabine’s work, and can’t wait to listen to the finished stories.

The Caravan is not the only amazing project that DDD is supporting. For more information visit our Facebook page.