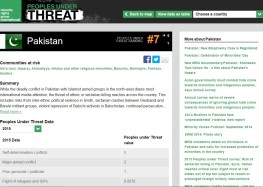 ‘Since January we have seen attacks on churches in Lahore and Kasur, as well as a mob attack against Christians worshipping in Sialkot,’ stated Sajid Christopher Paul, of the Lahore-based Human Friends Organization. ‘While this has led to serious fear amongst Christians of further violence, the community is resilient and determined to live in peace’, he added.

On the evening of Sunday 27 March a suicide bomber detonated himself near the childrens’ rides at the park, resulting in a death toll of over 70, and with more than 300 people injured. Jamaat-ul-Ahrar – a faction of the Tehreek-e-Taliban (TTP) – claimed responsibility for the attack, stating it was specifically targeted at Pakistan’s Christian community, members of which were celebrating Easter Sunday at the park. While Christians have comprised a disproportionate number of the casualties, others frequenting the popular park were also victim to the attack.

The attack took place against the backdrop of the recent one-year anniversary of two church bombings in Lahore’s Youhanabad neighbourhood, which is home to a sizeable Christian community. The attack on Gulshan-i-Iqbal Park is the most recent in what has already been a difficult year for Christians in Pakistan.

Recent years have seen Christians, who are also disproportionately targeted by the country’s blasphemy laws, leaving the country for safer environs. Challenges related to religious freedom in Pakistan have been highlighted by the response to the hanging of Mumtaz Qadri, the former bodyguard who was convicted of the 2011 killing of Salmaan Taseer, the Governor of Punjab, on account of his support for Asia Bibi, a Christian woman charged under Pakistan’s blasphemy laws.

On the same day of the attack in Lahore, the Pakistani capital Islamabad saw thousands marching in protest of Qadri’s execution and in support of the country’s blasphemy laws.

‘The response to Qadri’s murder has reflected the depth of discrimination against religious minorities in Pakistan, and severe and increasing limitations to discussing issues related to religious freedom,’ said Carl Soderbergh, MRG’s Director of Policy and Communications. ‘The government must do more to maintain momentum behind positive steps to promote the rights of minorities in Pakistan, rather than so heavily relying on a military approach to combatting religious extremism,’ he added.

Religious groups, including Shi’as, Ahmadis, Hindus and others have also been targeted by various forms of violence, such as hate speech and attacks on property and places of worship, as well as legal and social discrimination.