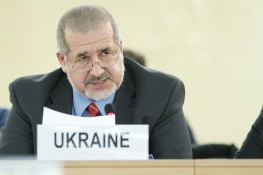 Today’s decision of Crimea’s Supreme Court to ban the Crimean Tatar Mejlis on grounds of extremism marks a new low in Russia’s treatment of indigenous peoples worldwide, and merits the strongest condemnation from the international community, including the UN system, states and indigenous peoples’ organizations.

The key to understanding the severity of the situation is the fact that the Crimean Tatar Mejlis is not just another NGO, but a representative institution of Crimean Tatar people who self-identify as indigenous people of Crimea, and who have been acknowledged as such by their home country Ukraine and a growing number of states and institutions around the world, including the European Parliament.

As such, the decision to ban the Mejlis directly violates Article 5 of the UN Declaration on Rights of Indigenous Peoples (UNDRIP), according to which

„States shall consult and cooperate in good faith with the indigenous peoples concerned through their own representative institutions in order to obtain their free, prior and informed consent before adopting and implementing legislative or administrative measures that may affect them.“

By banning a representative institution of an indigenous people of Crimea, a Ukrainian territory under de facto control of Russian authorities, Russia has attacked not only the Mejlis, but Crimean Tatar people as a whole. As such, Russia has placed itself outside the global consensus on the minimum standards for protecting the rights of indigenous peoples, as reflected in UNDRIP and related documents, such as the Outcome Document of the 2014 World Conference on Indigenous Peoples.

In addition, Russia has engaged in deeply immoral behaviour by banning a key institution of a people who in 1944 were collectively deported and subjected to a genocide by the Soviet Union, the legal predecessor of the Russian Federation. Instead of banning the Mejlis, the Russian Federation should apologize for the crimes committed by its predecessor and seek historic reconciliation with Crimean Tatar people.

In the meantime, the decision of Russian authorities to ban the Crimean Tatar Mejlis erodes the legitimacy of the Russian Federation to speak up in matters concerning the rights of indigenous peoples both internationally and domestically. As a Member of UN Permanent Forum on Indigenous Issues I call on the international community to amplify this message through all available channels, and consistently until the underlying issue has been resolved.

Disclaimer: This statement is issued in my personal capacity as Member of UN Permanent Forum on Indigenous Issues (UNPFII). It does not represent the views of the UNPFII, MRG nor those of the United Nations.

Photo: Refat Chubarov, Chairman of the Mejlis of the Crimean Tatar people