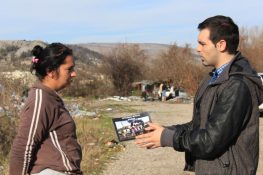 Watch a series of short documentaries that were made as part of MRG’s project ‘Bosnia and Herzegovina: Supporting minority victims of discrimination accessing their human rights’.

The Roma interviewees and NGO workers in the films highlight discrimination in the areas of housing (Osmanović family, Capljina) and education (Trebinje) but Roma people also face difficulties in finding employment, which often leads to poverty (Bugojno) and limited access to health care (Zavidovići).

The film tells the story of a single mom from the Roma community in Trebinje and her struggles to provide for her son and ensure he has a proper home and basic necessities and receives quality education. She explains how she is trying to overcome issues such unemployment and discrimination Roma communities face in general in Bosnia and Herzegovina.

The film tells the story of the Osmanović family, which was evicted from the apartment building in the municipality Stari Grad in Sarajevo, Bosnia and Herzegovina, where they allegedly lived for years prior to their eviction on 25th of August 2014. This family of eight has four children, including one who was 1.5 year old and another one who was a few-month old at the time of the eviction. The family was not provided with alternative accommodation, and when filming began in November 2014 they were living in front of this building, in a tiny makeshift shack.

The Jasarević Roma community—also known as “White Gypsies—would like to erect a fence around the graveyard that has been a burial site of their families for generations to protect it from ongoing vandalism and misuse. The Institution of Human Rights Ombudsman of Bosnia and Herzegovina already issued a recommendation in the case in February 2013, requesting the municipality of Lukovac to take measures to address the situation, providing adequate fencing, maintenance and protection of the cemetery. The recommendations have not been implemented up to this date. This film features an interview with the community representative, explaining the difficulties they are facing in protecting the grave yard from vandalism and misuse.

Most members of the ADA Roma community lived in shacks by a rubbish dump – the primary source of income for many members of the community – in a flood-prone area near Čapljina, without access to water, basic sanitation, adequate drainage and electricity.

To improve the housing conditions of the community, new housing units were built with the financial assistance of the Ministry of Human Rights and Refugees and an international donor. However, the site the municipality has allocated for the housing project lacked basic infrastructure and is in an isolated location far from education, emergency services and employment opportunities.

The closest settlement, almost a kilometre away, is a Bosniak returnee community also living in a segregated location far from public services. They protested against the allocation of a land plot to the Roma close to their village, citing human rights considerations and also expressing their frustration with the mayor’s policy towards them in particular, and minority communities in general.

Following time-consuming negotiations between the municipality, implementing organizations, representatives of the ADA Roma community and members of the Bosniak community, construction was finally completed in 2015. Despite its poor location, the Roma community accepted the land as they felt they had no other option and were concerned that, if they rejected the offer, they would not be provided with any alternative.

The first film shows the situation of the community before the housing units are completed, shredding some light on why housing projects aiming to improve the living conditions of marginalized Roma communities result in further disadvantages for these communities. The second film features interviews with community members explaining how the housing project furthered their segregation and isolation and discussing the difficulties they face living in the new housing units.

The film features an interview with a Roma woman leader from Visoko, Bosnia and Herzegovina. She discusses the work of her organisation, the programmes they are running and talks about specific projects to improve the situation of the local Roma community and how they involve Roma women in their activities.

For many Roma families in Bosnia and Herzegovina, collection of secondary raw materials is the only way to survive. Country waste companies have more and more business because of the growing number of those who have been collecting and selling secondary materials become that has become the sole source of income for them and their families. The films tells the story of Mr Zahirović, a Roma waste picker in Bugojno, who is being sued by local authorities for running an illegal business as his family collects, selects and then sells recyclable materials to a local waste company. However, similarly to other poor Roma families, he lives in poverty and cannot afford to open his own business. Nor can he be registered as self-employed person.

The film tells the story of Jasminka Bjelić, a Roma woman from Zavidovići, Bosnia and Herzegovina, who neither had health insurance nor money to pay for a pregnancy-related exam, received a potentially life-saving treatment too late for her or her baby to survive. According to the recollection of Jasminka’s partner, Jasminka arrived at Zavidovići health centre with heavy bleeding and excessive pain; however, she was informed that she could not be treated unless she pays for the treatment. She was then told go to the private doctor’s office where she had been treated from the beginning of her pregnancy for free. She was carried in her partner’s arms to his office where she was examined, and it was determined that she was in a serious condition and needed to be transported to the cantonal hospital in Zenica. However, Jasminka was the only patient who was waiting for transportation by ambulance; as a result, she had to wait for other patients to be transported for budgetary reasons. After her arrival at the cantonal hospital in Zenica, she received necessary treatment but passed away 10 days later.

According to the relevant local regulations, both pregnancy and urgent care should be provided free regardless of the insurance status of the person, so it is unclear why Jasminka was asked to pay for an exam that should have been provided for free and was sent away when she first visited the health centre. The case raises the issue of institutionalised intersectional discrimination and illustrates the clear need for special measures to address this issue.

The municipality of Kakanj in Bosnia and Herzegovina initiated a feasibility assessment in order to regularize the Varda Roma settlement. Consisting of around 130 households, it was originally built without a construction permit in the 1980s on a land site that was created by long-term disposal of coal waste materials. Some families on the settlement live in substandard housing conditions without electricity or water, and some of the housing units are badly damaged due to poor soil conditions.

In coordination with local Roma leaders and organizations, the municipality officials carried out a full assessment of all the houses except those where the families did not grant permission. Following a careful assessment, the municipality invested efforts to secure financial resources to regularize the settlement and undertake improvements to bring it to a minimum standard of adequacy. They also developed a plan for the settlement in consultation with local Roma representatives and organizations.

During the assessment process, it was decided that some of the houses were in such a dire condition that they would have to be demolished and replaced with new apartments. The municipality started implementing a housing project to build new apartment units for the families living in the houses awaiting demolition, and offered to pay for their temporarily accommodation. Since many Roma families survive by collecting raw materials, the municipality also decided to try to separately fundraise for a storage unit to be built next to the apartment building.

The second film was produced in 2016, featuring interviews with families once they moved into their new apartment.