UPDATE 27 JUNE 2016 – Case against Santa Cruz 13 Discontinued…Prosecution of Maya in Belize ‘politically motivated’ and evidence of inequality before the law, says MRG 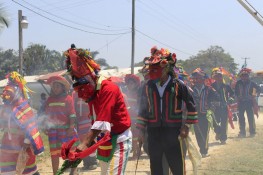 MRG widely applauds this move by the DPP

For more information read the statement from the Maya Leaders Alliance and Toledo Alcaldes Association.

The involvement of Belize’s Director of Public Prosecutions in the trial of Maya rights leader Cristina Coc, of the Maya Leaders Alliance (MLA), and ten villagers from the Toledo district on charges of assault is of grave concern, and a disproportionate reaction to the alleged crimes committed, says Minority Rights Group International (MRG).

‘The involvement of Belize’s most senior public prosecutor in what would otherwise be a common case of assault with a maximum sentence of two to three years imprisonment clearly shows that this is in fact no common case, but a politically motivated prosecution aimed at silencing the voice of Cristina Coc and the MLA more generally,’ says Carla Clarke, MRG’s Senior Legal Officer.

The trial is due to start on 27 June 2016 and is related to events that took place in 2015, when, despite repeated requests from Maya residents of the village of Santa Cruz, the authorities failed to take any action against a non-Maya, Rupert Myles, who had unlawfully constructed a house on an area of land within the village, which is also an archaeological and protected site.

Local Maya villagers felt they had no option but to take matters into their own hands to prevent the continuing trespass and property damage, and on 20 June 2015, during a heated traditional community meeting, they briefly detained Rupert Myles. Rather than bringing the matter to a close, this action resulted in 12 of the villagers being arrested.

They were subsequently charged with assault and aggravated assault. Charges against two of them have since been dropped, whilst no charges have ever been brought against Myles.

In addition to the ten villagers, Cristina Coc is also standing trial, despite not having taken any part in the events of June 2015 in Santa Cruz. Ms Coc is being unnecessarily criminalised for her tireless campaigning for the rights of Maya, says MRG.

‘MRG hopes that justice will be done at the forthcoming trial with the case thrown out, rather than the criminal process being allowed to be used as an instrument of retaliation by the state for the MLA’s own legal work in securing recognition and protection of traditional Maya lands,’ adds Clarke.

In 2007, Belize’s High Court declared that ‘the villages of Santa Cruz and Conejo and their members hold, respectively, collective and individual rights in the lands and resources that they have used and occupied according to Maya customary practices and that these rights constitute “property” within the Belize Constitution.’ This ruling was never challenged by the government of Belize.