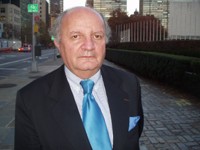 Minority Rights Group International (MRG) has submitted a formal request today to the Council of Europe for the initiation of infringement proceedings against Bosnia and Herzegovina in relation to a European Court of Human Rights judgment in the Sejdić and Finći case.

The process allows the Court to hold a state to account for failure to comply with its legally binding decisions.

In a landmark case in 2009, a Bosnian Jew, Jakob Finci, and an ethnic Roma, Dervo Sejdić, successfully argued that Bosnia’s Constitution and electoral laws are discriminatory insofar as they prevent minorities from standing for election to the Presidency and upper house of the Parliament.

Bosnia’s Constitution, established under the Dayton Peace Agreement, and its electoral laws, allow only candidates identifying themselves as members of one of the Constituent Peoples (Bosniaks, Bosnian Croats and Bosnian Serbs) to stand for election to the three-member Presidency and House of Peoples. Other communities (‘Others’), including national minorities, are excluded from both, and their right to full participation in the political process is denied.

Despite declared commitments from the Bosnian government that it will implement the judgment, and pressure from the international community to take such steps, Bosnian authorities have so far failed to act.

‘The continuing failure of the Bosnian authorities to amend the Constitution in accordance with the judgment has far-reaching consequences,’ says Mark Lattimer, MRG’s Executive Director. ‘In addition to undermining the legitimacy of the Court in Strasbourg, it means that persons who do not identify themselves as belonging to one of three major ethnic groups in Bosnia continue to be legally barred from running for high office based solely on their ethnicity,’ he adds.

The right of ‘Others’ to political participation is not only guaranteed by the European Convention of Human Rights, which the Court applied, but is also a fundamental right under international law, says MRG.

‘Barring individuals from standing for election solely on grounds of ethnic origin, religion or association with a minority group is unacceptable in today’s world,’ says Lattimer.

‘The time is ripe for Bosnia to live up to its international commitments. To eliminate discrimination against minorities and allow all citizens full participation in the political process, the government should now take immediate steps to reach consensus on how to amend its Constitution and electoral laws.’