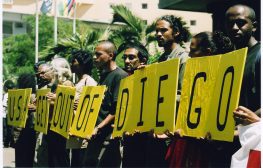 Minority Rights Group International heartily welcomes recommendations from a leading UN body urging the UK government to smooth the way for the Chagossians to return to their island home in the Indian Ocean.

On 26 August the UN Committee on the Elimination of Racial Discrimination (CERD) issued its concluding observations on the UK. For the first time, a full paragraph on the Chagossians was included in the report, also notably, a recommendation to ‘facilitate their return to their islands and to provide them with an effective remedy, including compensation.’

‘The fact that CERD has focussed its attention on the situation facing the Chagossians is highly significant. The Committee is a highly respected international body and oversees the implementation of one of the core human rights treaties,’ says Carl Soderbergh, MRG’s Director of Policy and Communications. ‘The strongly worded critique reflects the shameful treatment the Chagossians have endured for decades.’

The Committee also criticises the UK government for its lack of progress on previous CERD recommendations to withdraw what it describes as ‘discriminatory restrictions on Chagossians from entering Diego Garcia or other islands in the Chagos.’

The Chagos archipelago is an island chain owned by the UK and located in the Indian Ocean. In the early 1960s, the British government contracted with the United States to establish a major military base on the largest of the islands, Diego Garcia. To facilitate creation of the base, in 1965 the Chagos archipelago (including Diego Garcia) was divided from Mauritius (then a British colony) and constituted as a separate colony, the British Indian Ocean Territory.

Between 1967 and 1973, the UK removed all native inhabitants of the Islands. The Chagossians now live in poverty and marginalisation in Mauritius, Seychelles and the UK. Adequate provision was never made by the UK authorities for their housing, employment, healthcare, social needs or community facilities. The Chagossians have never been appropriately consulted about their removal from the islands.

The Islanders’ strongly held desire to return home has led to a protracted legal battle, both in the UK and at the European Court of Human Rights. MRG has provided legal support at key moments in their struggle.

‘We are delighted CERD have backed the Chagossian campaign for justice. They join growing national and international calls for the UK Government to finally do the right thing,’ says Stefan Donnelly, Committee Chair of the UK Chagos Support Association. ‘An exhaustive government commissioned study has shown return could be a success. Hundreds of Chagossians are ready to go. It’s time the UK removed a terrible stain on its international reputation by beginning a fair return programme as soon as possible.’

CERD is a committee of independent experts appointed to monitor the implementation by governments of the International Convention on the Elimination of all Forms of Racial Discrimination. The Convention is legally binding on states that are party to it, which means that the Committee’s findings have a high persuasive value. In particular, the Committee insists that the UK government has an obligation to apply the Convention to all territories under its control.

Photo: Protest group Lalit outside the US Embassy in Mauritius in 2004