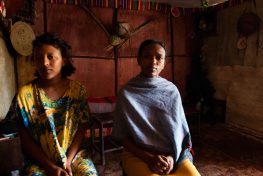 Agnes Kabajuni, MRG’s Africa Regional Manager based in our Kampala office, argues that the Ethiopian government should be harnessing the power of its population’s diversity, rather than brutally cracking down on legitimate protest.

When Ethiopia Silver medalist Feyisa Lilesa crossed his hands at the finishing line at the Rio Olympic Games, the interpretation of those I was with was very different from the reality. My young brother thought he was telling the next athlete that, ‘too late for you I’ve taken the medal.’ The international media widely reported on the meaning of his crossed hands as a protest against government atrocities towards the Oromo people. I could not help but admire Feyisa Lilesa’s heroic act. It talked volumes of the situation inside Oromia region and one could almost feel what those directly affected by the iron hands of the Ethiopian security agencies felt. Within a short space of time, all over the world, people were offered a glimpse into Oromo human rights violations.

The Amhara region of the country, on the other hand, has received less visibility. Yet they too, following Oromo protests, have faced crackdown and human rights violations, ranging from killing, rape and torture to arrests for protesting against marginalization.

From November 2015 to August 2016 international organisations estimate that 500 people have been killed in Ethiopia by security agents responding to the protests against marginalisation, discrimination and expropriation of lands for indigenous populations in the Oromia and Amhara regions. This year between 5 and 7 August alone, nearly 100 people were reported killed and others arrested.

The Oromo people, despite being the biggest ethnic population, are amongst the most discriminated in the country. Fear of further marginalization and loss of land triggered their recent protests, which were met with a harsh response from the government.

The Amhara people, named after the Amhara region from whence they come, are considered the second largest ethnic population in Ethiopia; and decry discrimination by the current government. They claim that their ancestral lands of Welkait, Tsegede, Tselemt, Setit, Tach Armachiho, Raya, Qobo and Metekel were forcefully taken by the government and then allocated to Star Agricultural Development Plc, an Ethiopian company owned by billionaire Sheikh Mohammed Al Amoudi. Inspired by the Oromo protests, the Amhara people have since August protested these injustices. On August 7 about 30 protesters were killed and in the week of August 29, security forces killed more than 70 protesters and injured many more in Bahir Dar city, and other towns across Northern Amhara region.

Human rights violations against the Amhara and Oromo people are happening against a backdrop of a highly restrictive environment. Civil society activists find difficulties to reach the worst hit places to access information, and risk arrest and persecution. Equally, journalists, bloggers and other social media users have faced harassment and intimidation. Such a restricted space is a hindrance for effective dialogue, reinforces persisting human rights violations and delays justice for victims. Yet the Ethiopia government remains adamant on what is happening, and has ignored calls from the international community to constitute an independent inquiry into the use of excessive force by the security agents to quell protests.

Continued use of excessive force, arbitrary arrests and extrajudicial killings, rather than dialogue and meaningful investigation into violations, will only make the situation worse. The Ethiopia government should pursue development policies that ensure equitable access to land, and foreign investment policies that reinforce, rather than undermine, the economic and social wellbeing of communities. For example, the land use policy in Ethiopia offers more protection to foreign investors than it does local investors. More so, peasants and semi-pastoral communities have access to only small plots of agricultural land and the youth have serious problems of land access.

Undoubtedly, the Ethiopian government can benefit from embracing the diversity of its peoples. A unified country can achieve better governance and sustainable economic and social development. Rather than persecute and harass its minorities and indigenous peoples, the government should recognise, protect and respect their rights.

Comments are closed.
Filed Under: Ethiopia