Religious minorities ‘under threat’ in Bangladesh, complicit authorities must do more – new report 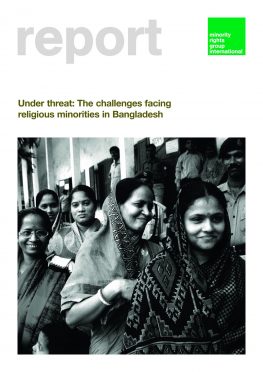 According to the report, Under threat: the challenges facing religious minorities in Bangladesh, since 2013, the country has been hit by a series of violent incidents targeting its religious minorities by militant groups, some of which claim affiliation with groups such as Islamic State or al-Qaeda.

Most recently, at the end of October, Hindu homes and temples were attacked in Nasirnagar, Eastern Bangladesh, injuring over 100 people. While the government has condemned these attacks, they have heightened insecurity amongst the Hindu minority in Bangladesh, who also suffered other incidents of religious intolerance during the Diwali holiday, including pelting of stones at temples and defacing of religious idols.

‘The rising attacks and death toll have highlighted how vulnerable minorities are to attacks, but their situation is also informed by wider structural issues within Bangladeshi society,’ says Carl Soderbergh, MRG’s Director of Policy and Communications. ‘The variety of abuses they experience, from forced abduction and sexual assault to land grabbing and arson, have occurred within a broader climate of impunity, with many abuses appearing to be carried out with the complicity of law enforcement agencies and the judiciary.’

In many cases, official policies have made religious minority rights more precarious rather than less. In the Chittagong Hills, for example, the government-sponsored migration of Bengali settlers since the 1970s has led to conflict and dispossession for indigenous peoples, who are predominantly Buddhist and Christian, as well as Hindu and animist, leaving many displaced from their ancestral land. There are also ongoing high levels of gender-based violence against indigenous women living in the region.

MRG says that for all of these groups, who alongside atheists, secular bloggers and liberals, have borne the brunt of extremist attacks, this violence is the latest chapter in a long history of discrimination. Despite the promise of independence in 1971 and the passing of a secularist Constitution the following year, in the ensuing years an increasingly restrictive religious nationalism has sidelined Bangladesh’s minorities within their own country.

‘Though better protection of minorities by the authorities is essential, a wider process of social transformation is also needed. Stereotypes must be challenged and greater effort must be invested in championing respect for all beliefs,’ says Soderbergh. ‘This requires an environment that nurtures rather than represses freedoms, while ensuring the basic right to religious expression – a right that, in the current context of Bangladesh, is increasingly under threat.’

This report, drawing on published sources, fieldwork by local rapporteurs and first-hand author interviews with a number of activists, lawyers and journalists, aims to provide a fuller picture of the complex challenges facing these communities and the need for a society-wide solution to the insecurity that has convulsed the country in the last few years.

– Partners in Bangladesh available for interview upon request

To arrange interviews, or request a copy of the report under embargo please contact MRG’s Press Office: