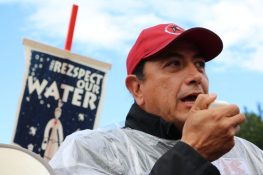 U.S. President Donald Trump’s signing of an executive order, just four days after his inauguration, clearing the way for the completion of the controversial Dakota Access oil pipeline, is a deeply disappointing move, and a huge blow for Sioux and other indigenous peoples in North America, says Minority Rights Group International (MRG).

‘Frankly, it’s no surprise, given the tenor of Trump’s campaign, but we are extremely concerned,’ expressed Carl Soderbergh, MRG’s Director of Policy & Communications. ‘Trump also insisted that only US-made steel can be used to make this and other pipelines. Essentially, he is risking the health and well-being of indigenous peoples to make a cheap political point.’

Soderbergh added, ‘The pipeline was originally rerouted because of fears that it risked contaminating the water supply of Bismarck, North Dakota. Trump’s decision sadly shows that in his eyes, Sioux are second-class citizens and not worthy of the same consideration as the residents of that city.’

Thousands of indigenous community members and their allies protested for months in 2016 against the routing of the pipeline beneath Lake Oahe, a reservoir that is part of the Missouri River in North Dakota. The lake is less than a mile from the Standing Rock Sioux reservation, and the community says the pipeline threatens their water resources and sacred sites.

They claimed victory in December when the Army Corps of Engineers called a halt to the project to tunnel the pipeline under the Missouri River in order to explore alternative routes. However the celebration was muted, and, suspicious that the Trump administration would reverse the decision once in office, protesters have remained in the Oceti Sakowin Camp in order to defend their land and resources.

Dave Archambault II, chairman of the Standing Rock Sioux, said on Tuesday, ‘Americans know this pipeline was unfairly rerouted towards our nation and without our consent. The existing pipeline route risks infringing on our treaty rights, contaminating our water and the water of 17 million Americans downstream.’

The Dakota pipeline is still undergoing an environmental impact assessment, which is key to the project continuing. For Trump to bypass that, he needs Congress to pass a bill excluding the pipeline from the National Environmental Protection Act.

Indigenous activists have pledged to continue to resist the pipeline construction.

‘These attacks will not be ignored, our resistance is stronger now than ever before and we are prepared to push back at any reckless decision made by this Administration. If Trump does not pull back from implementing these orders, it will only result in more massive mobilization and civil disobedience on a scale never seen of a newly seated President of the United States,’ said Tom BK Goldtooth, the Executive Director of the Indigenous Environmental Network.

The Standing Rock Sioux Reservation is situated in North and South Dakota. The people of Standing Rock are members of the Dakota and Lakota nations. The people of these nations are often called ‘Sioux,’ a corruption by French traders in the seventeenth century of the Ojibwa word ‘Nadouwesou’. There are various Sioux divisions and each has important cultural, linguistic, territorial and political distinctions.