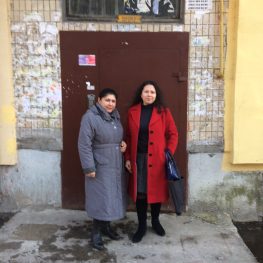 Being uprooted from your home by war is unimaginably tough for anyone, but for Roma families displaced by the conflict in eastern Ukraine, a new life in a strange city is especially difficult because of the marginalisation and discrimination they face on a daily basis.

After having to flee the war in the east, Tamara, a Romani woman who is 43, now lives with seven other members of her close family, including her daughter Yana who is two years old, and her elderly disabled mother, in a one bedroom flat in a low-income neighbourhood on the edge of the capital city Kiev.

Emma Eastwood, MRG’s Senior Media Officer, who was in Ukraine meeting with our partner organisation Roma Women Fund ‘Chiricli’, spoke to Tamara and her family about their life before and after the war ravaged their hometown.

A modest, but peaceful existence

The family lived in Novotroitske in Donetsk Oblast in eastern Ukraine. Tamara says they were happy, and integrated in a mixed neighbourhood. They owned their own house and a car, and Tamara, who is educated up to secondary level, which is relatively rare amongst Romani women, made a modest, but decent living selling goods in the local market.

The conflict in eastern Ukraine erupted after Russia annexed Ukraine’s southern Crimea peninsula in March 2014. A ceasefire was eventually agreed in February 2015 but there have been frequent violations. Fighting continues to this day. The US and EU imposed sanctions on Russia in response to its actions in eastern Ukraine and Crimea. Russia has repeatedly denied sending troops and weapons into eastern Ukraine, but admits that Russian ‘volunteers’ fight alongside the separatist rebels against the Ukrainian army.

Tamara’s younger sister Lealya said she had no idea the war was going to happen and was taken by complete surprise when the bombs started falling. Even when the house was under attack, her mother had to chide her to hide the children away in the basement away from danger.

The family soon found themselves in the heart of the battle; their house was on the street which formed the frontline between Ukrainian and rebel forces. Her brother’s house on the same street was occupied and commandeered by the Ukrainian army at such short notice that he was forced to leave without even having the time to grab his family’s documents, including the all important ID cards and birth certificates essential to accessing services as an internally displaced person (IDP).

Tamara meanwhile gave birth to her daughter Yana during this period, in a birth centre that was by that point converted in to a military hospital. She was so stressed that her milk dried up and was unable to breastfeed tiny Yana, who was born with a deformity in one of her legs, and problems with her lungs that need costly treatment.

Two years ago Tamara decided that enough was enough and the family should flee the conflict zone. She made her way to Kiev with one-month old Yana to try and find somewhere to live for her and the rest of the family.

She eventually managed to find a house and sent for the family. Even their journey was beset by problems; the train lines were damaged in the fighting and they had to be re-routed through southern Ukraine with their disabled mother and toddlers in tow. Her sister Lealya says, ‘You cannot even begin to imagine how awful it was.’

Life as an IDP in Kiev

Tamara says that it was really difficult to rent an apartment in Kiev because they are both Roma and IDPs, and landlords know they have few resources. They try and shield their identity, but people can tell they are Roma from the way they look, and guess their IDP status the moment they see their passports or ID cards and see where they come from.

Her brother’s flat is in very poor condition according to Zola, who leads the Chiricli organisation and supports the family through Valentina, a local Roma mediator who also came to visit the family with us. He has no money to pay a two month deposit on his house, so is forced to pay rent on a daily basis to his landlord, which understandably he finds extremely stressful.

As IDPs each family unit receives 1500 Ukrainian hryvnia (approximately 54 Euros) per month from the state, but the rent on the apartment is 3000 hryvnia and there is little left over for food and other essentials. Tamara’s brother does two or three casual jobs a day to try and make ends meet, whilst she and her sister, who also has a two year old son, would love to work, but no one will give them work and they can’t afford child care for their children anyway.

Their elderly mother (who I never met as she was confined to the only bed in the flat, and our interview took place in the tiny kitchen where other family members sleep on the floor at night) is severely disabled and chronically ill, and has to be carried up and down the two flights of stairs to the street as there is no lift. Yana meanwhile needs monthly massages and special winter orthopaedic shoes to help with the deformity in her leg, but they cost 800 hryvnia. IDPs do get free medical care in Ukraine, but they still have to pay for medicines, and with at least three members of the family that I could count in need of long-term medication, this was clearly beyond their meagre budget.

The family has often been on the receiving end of racism and hate speech since they were forced to move to Kiev.

In this district of the city Tamara says that people are particularly aggressive towards Roma. Her brother, who lives nearby, has an eleven year-old son who attended the local school. His father told him to make sure the other kids didn’t know he was Roma or an IDP, but eventually he let it slip and was severely bullied. He has since stopped going to school. Her brother himself was also attacked at the market when they found out he was Roma from the East, whilst his son was thrown out of a shop and called a ‘dirty gypsy’ when he tried to buy chocolate.

Their neighbours, they say, don’t like Roma and have called the police on numerous occasions to complain about the noise coming from Tamara’s flat. She was anxious to point out that the noise they create is not because they ‘are fighting or drinking,’ but because they are a family of eight with three young children living in just one room. Of course children are bound to cry and fight, in fact when I was there Yana pulled a typical two-year old tantrum, but in such a confined space it felt much more intense than usual.

Tamara was obviously deeply stressed by trying to keep her family’s situation under control. She said that every time the police come they threaten the family with eviction unless they ‘quieten down,’ something which Zola from Chiricli was quick to point out was totally illegal.

When I asked about their property back home in Novotroitske, Tamara says they’ve tried to go back a number of times, but it is extremely difficult as you have to ask permission from the army and prove that you used to live there, which is impossible if you don’t have the right documents. Tamara did manage to make it once, but the house was irrevocably damaged, the roof has all but been completely destroyed and all of the windows have been broken.

She doesn’t think they’ll ever get the house back, and with a damaged roof throughout the harsh Ukrainian winter it is bound to be unliveable. There are possibilities for compensation, but they had no idea how to access those services. Zola assured the family that Chiricli would be able to help with this, along with UNHCR who they would bring to visit the flat in a few days. As IDPS each family unit is entitled to a lump sum payment of 4000 hryvnia from the UN agency.

As we left the flat to return to the city centre, Tamara came out on to the landing to escape her daughter’s tantrum for a few seconds and talk practicalities with the women from Chiricli. She has a slight frame, with thin bare arms peeping out from an over-sized red housecoat, yet she, like so many of the other minority and indigenous women I meet around the world, carries a heavy burden of responsibility in caring for her family under such testing circumstances. I wish her well, and hope that one day she can return home to a better and peaceful life.

Photo: Valentina (l) and Zola from Chiricli in front of the entrance to the flats where Tamara lives in Kiev. Understandably, Tamara didn’t want us to photograph her family or their living conditions.