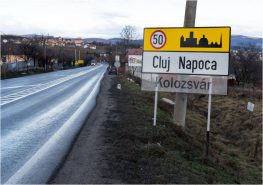 A Court decision which compels the local authorities to install bilingual place names in the city of Cluj-Napoca/Kolozsvár is a major step forward in the protection of minority rights in Romania, says Minority Rights Group International (MRG).

The Transylvanian city is home to the second largest Hungarian minority community in Romania, but public signs are still monolingual. According to international standards, public signs need to be displayed in minority languages in areas traditionally inhabited by substantial numbers of persons belonging to a minority.

‘Multilingual public signs convey an important message about the acceptance and accommodation of minority languages and are important for the preservation of minority culture as a whole,’ says Neil Clarke, MRG’s Europe Office Managing Director. ‘They also ensure that assimilation tendencies do not work against the preservation of the language. We urge the Mayor and local authorities to abide by the ruling and install the signs without further delay.’

Under the current legislation, minorities can use minority languages in public life in municipalities where they make up at least 20 per cent of the population, but the Mayor maintained they are not required to display bilingual place signs because the percentage of Hungarians has fallen under 20 per cent. However, the law also stipulates that if a local minority population falls below this threshold, they will still continue to enjoy the linguistic rights granted to them.

The legal battle addressing this issue started in 2014, when a Dutch organisation initiated a lawsuit against the municipality. The court ruled that bilingual place signs must be displayed; however the Appeal Court quashed the judgment. In 2015, a local minority rights association, joined by 374 claimants, renewed the lawsuit, whilst a local advocacy group, Musai-Muszáj, started an awareness-raising campaign to support the case. A new judgment was issued on 21 February, International Mother Language Day, and confirmed on 22 March, again requiring Cluj-Napoca/Kolozsvár to install bilingual place signs.

‘The decision of the court strengthens the Hungarian community’s trust in the ability of the Romanian justice system to protect and enforce minority rights standards,’ says András Bethlendi, a member of the Musai-Muszáj.

The Mayor has vowed to appeal the decision, but MRG says that appealing the judgment yet again would only further delay the implementation of important linguistic rights. An unfavourable decision from the Court of Appeal could also lead to a violation of regional minority rights treaties to which Romania is a party, which guarantee the protection of the use of minority languages.