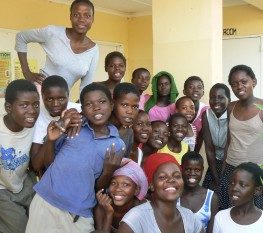 A government letter on 27 March 2017 acknowledging Shikati Jacob Seidisa as chief of the Wayeyi finally offers official and documented recognition of the tribe in Botswana, and is hugely welcome, says Minority Rights Group International (MRG).

The letter, from the Ministry of Local Government and Rural Development, sets out the exact intention of the recognition, and records that extensive research has been done on the history and background of the tribe. This recognition of the chief or tribal leader of the Wayeyi, a community living mainly along the Okavango Delta, comes almost a decade after submission of a formal application under local legislation for recognition and a year after their official recognition as a tribe.

‘This is wonderful news as it is official government correspondence,’ says Lesego Nchunga, MRG’s Botswana Legal Officer. ‘The tribe’s recognition was never before documented, but this letter will leave no doubt in the mind of any person reading it; the tribe and its current leader are finally and fully recognised.’

Following independence, the Botswana government focused on national unity and ethnic neutrality, a move that effectively suppressed and discriminated against Botswana’s non-Tswana communities. Yet despite there being over 30 tribal groups, only twelve tribes are officially recognized in the Constitution. Eight Tswana (previously known as majority) tribes have seats in the Ntlo Ya Dikgosi (the House of Chiefs which advises parliament on tribal and cultural matters), whilst four are non-Tswana speaking.

The letter does however raise cause for concern, says MRG.

Tswana have territories as allocated by the Tribal Territories Act, yet according to Nchunga, the recognition of minority tribes such as the Wayeyi should also be reflected in change in land ownership. The Minister’s letter however, reinforces the limitations experienced by tribal minorities, who have to live in land known to belong to the Tswana.

The letter also means that for the next tribal leader to be recognised, they would have to undergo the process of applying to the Minister and await the investigations of the Ministry, before being accorded recognition. This process is not the same as that followed in the determination of the chiefs of Tswana tribes.

It also specifically states that the recognition does not confer any rights, not otherwise recognised or conferred by existing law. Although this may appear proper, says MRG, it essentially confirms an individual whose application was successful, but says nothing of the powers they have besides those of leading a tribe.

‘The government must now turn to the real impacts of recognition, including political participation, especially regarding representation in the Ntlo ya Dikgosi; as well as land rights, and use of mother-tongue in schools and other public spaces,’ she adds.