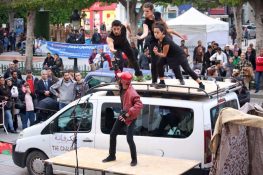 ‘The new trauma is a quarter of the population are refugees. We’re not living in a post-traumatic experience. We’re in the thick of it. This is a piece about little by little, starting conversations around it and trying to figure it and wrap our heads and hearts around it,’ says Ailin Conant, trainer and co-director of the Caravan project.

The Caravan project was a tour of street performances in Lebanon, designed to share the stories of Syrian refugees with the Lebanese people and the world.

The project started with conversations with the Syrian refugees in their camps. Sabine Choucair, director of the performance, talked to 300 refugees and recorded 14 stories that were published on YouTube (with English subtitles). Says Conant, ‘Even though I was in London, I feel like I was able to connect to the piece through these little segments that were being released. The reach of the project became shareable.’ People globally could watch and connect to their stories. Says Silvia Quattrini, MRG project assistant, ‘The stories were very powerful and I felt like I wanted to cry. In that moment, although I didn’t see the performance yet, I knew it was going to have a huge impact.’

In Lebanon, the story of two women was sent to a radio station, which played the recording on air. After, a popular television news station picked it up and invited the two women to appear in an interview. The women, said it was a ‘life-changing’ experience and were so proud to be heard by more than 100,000 people in the country.

These 14 stories became the basis for the street performances. Claire Thomas, MRG’s deputy director notes: ‘In street theatre, there are limits to your options for staging and lighting but by using these stories as an audio backdrop or soundscape, the Caravan was able to easily and cheaply achieve drama which was really authentic, impactful and atmospheric, which is really innovative. For me, these authentic refugee-voiced soundscapes were a critical part of the success of the project.’

While all the actors were Syrians, there were some major differences between the two casts. The Bekaa cast had little to no acting experience, while the Beirut cast had professional actors and more experience. Also, the Bekaa cast members were living in the camps and had more recently left Syria. In contrast, the Beirut-based cast had migrated to Lebanon much earlier, and were further removed from the war. The Bekaa cast, was therefore responsible for designing the show. ‘The performance was devised by people from the camp, from the families themselves and that was really special,’ says Choucair. ‘There’s something really special about people not only telling their stories, but acting them. That was really raw and real. If I get the chance to do something like that again, I would fight to have people from the camps performing.’

In the performances, the actors were having fun with these stories and trying to engage the audience in a light and playful way. Choucair says, ‘We shared important, human stories that are not necessarily, “Oh I’m a refugee and I’m dying and I don’t have food and I’m living in the sad place”, but they were more like “I’m a refugee and I have a sexual problem with my husband because we have to live in this house with no doors,” and this connects more with people. I am a human being. It’s the quality of the stories that was really special.’

As the performance went on, an actor planted in the crowd, gets increasingly agitated and says, ‘Why are you telling us this, these aren’t our problems, this happens to Lebanese people too, why are you bringing this into our space, we have our own problems?’ So the fundamental conflict of the performance is the presentation of the play has to stop because this ‘audience member’ gets restless.

They manufactured this tense scene between the ‘audience member’ and the cast. Then an actor comes in and says, ‘Let’s calm this down and lets have a discussion about this’ and passes the microphone to audience members. The audience members start to engage on this subject, ‘Why are these stories being presented? What should our relationship to these stories be? Is this useful?’ ‘They are really participating, they are not giving an answer because they have to,’ says Quattrini. ‘Everyone wants to speak. It was very lively.’

It was remarkable, says Conant, ‘We actually succeeded in creating and managing a space for healthy dialogue. It’s not just people sitting there saying “Syrians are our brothers and sisters. We need to love them.” That happens too. But you also have real concerns. You have real debate and that’s where real change happens. Where people can have the space to calmly express their fears and their grievances and their hopes and find some common ground.’ These weren’t impersonal stories written in a newspaper for Lebanese people to read passively and absorb.

This was sharing experiences and stories, face to face, connecting on a human level.

One man told the actors that he felt ashamed to be not doing anything to help the Syrians. There were plenty of touching moments during and after the performance. ‘People would cry so much, would feel so much, and come and hug us and thank us for sharing stories and saying “Sorry we didn’t know, we had a different idea,”’ says Choucair. ‘These are very precious moments, that stay with us, in our bodies and feelings.’ Every performance there were at least one or two of these special interactions and moments between the audience and cast, according to Choucair.

Many of the Lebanese people could relate to or identify with the refugees. ‘What surprised me is the reaction of the Lebanese people because I was expecting worse reactions. Actually, there was a lot of connection with the Lebanese civil war so when they heard the stories they went “Ah, this happened to me,”’ says Choucair. The performance had rekindled old memories for many of the Lebanese, making the stories feel that much more relevant, and eliciting a wider and deeper response in the audiences. Adds Beirut-based actor, Mohammed Lattouf, ‘The lack of health and school facilities are as much of an issue for the marginalized and poor Lebanese communities as it is for Syrian refugees displaced in Lebanon.’ Their empathy clearly manifested itself. It is telling that audiences ‘reacted in a positive way, even if they were not in favour of Syrian refugees staying in Lebanon’, says Choucair.

Although the main objective of the project was to influence public opinion, performing in camps had numerous positive impacts on the refugees there. First, refugees were thrilled to hear that their stories were being told to Lebanese people in a direct and interactive way. Second, the refugees felt like they were being listened to and would be noticed. ‘And the fact they see a performance on the street, telling these stories, I would say by itself, is good for them. Just to feel like, it’s not like what we said is in a report that the UN is never going to read. This is what they used to tell me,’ observed Choucair. While reports are valuable for national and international advocacy, too often, there is no immediate and visible impact in the local area felt by the refugees.

The community embraced the staff and cast. ‘I think all the camps, they all knew about the project, they all knew about the stories being told, so it had a very big impact in the communities. When I go to these camps, they all know me, they feel I am part of the family, they feel this had a very positive impact on them. They really loved what happened,’ remarked Choucair. Since it was a project born out of its community members, its influence on the community was even more significant.

One of the most remarkable aspects of this project was that, while it touched on local and national issues in Lebanon, it had such an international outreach. The project was written about in the Associated Press and consequently The New York Times and Al Jeezera Plus along with other national and regional media outlets. Says Conant, ‘We’re not just talking about within the population of Lebanon, we’re talking about tens of thousands and hundreds of thousands of people who have engaged with this stuff. It felt like the international community was engaging in it in a way it never has before on one of my international projects. It felt grassroots but at the same time public.’

The one area where the project struggled was advocacy in Lebanon. ‘It would have been better to have a stronger relationship and reaction from local decision-makers,’ says Quattrini. Arranging and preparing for the performances took so much time, there was little time to reach out to local and national stakeholders.

So much preparation needed to be done for security reasons. Choucair was on the phone with the Lebanese intelligence asking, ‘Should we do it today? Is the situation fine?’ In fact, performances stopped for almost two weeks because of a nearby suicide bombing. With all this coordinating, little advocacy could be done and therefore, Lebanese decision-makers did not attend any of the performances.

Despite this shortcoming, the project was an overall success. UNICEF was so impressed they replicated the format and did another Caravan street performance tour with Choucair. This time it was about promoting schooling for refugees.

The project was able to humanize a major international crisis and generate debates about migration, inclusion, belonging and identity at both grassroots and international levels.