Building a network: The Eastern Partnership 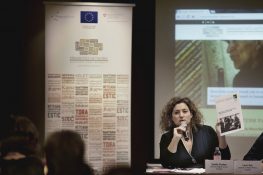 I think when we had that first meeting, personally, in Georgia, when all the partners came together and we got the funding to start the network, it was like, this is what all of us have been working towards for 5–10 years – to get to this level. That minority organizations are actors at this level,’ says Agit Mirzoev, from the Analytical Centre for Inter- Ethnic Cooperation and Consultations.

In 2011, following the formation of the Eastern Partnership in 2009, Neil Clarke, head of MRG Europe, and partners began to design a network for minorities as a part of the Eastern Partnership, which included Armenia, Azerbaijan, Belarus, Georgia, Moldova and Ukraine. The project aimed to construct an enabling environment which increased capacities and to encourage networking between minority activists leading to their increased engagement with relevant national authorities and a strengthened role within the Eastern Partnership. Fortunately, Clarke drew on previous experience working on a similar project in the Western Balkans to strategize for the network.

Clarke’s experience in the Western Balkans project had taught him that in-country delegations write reports to the national delegations in Brussels, who summarize those reports and develop partnership agreements with other countries. These officials are removed from the minority situations, in-country. MRG, therefore, targeted this information gap between the delegations in-country and the manifestation of EU policy in Brussels. ‘So what we started to do that was unique was to target more of our information lobbying on Brussels,’ explains Clarke. ‘Because they define how the information is used. They really define the impact of information, across the EU system.’ So Clarke and Eastern Partnership Minority Network (EaPMN) members met with the EU decision-makers, who write the agreements and progress reports, to strengthen their knowledge.

The EaPMN’s project officers trained minority representatives in how to talk to decision-makers and what materials to bring, and held preparatory discussions to train them for their advocacy visits. Adds Zsófia Farkas, MRG Europe’s managing director, ‘There is a certain credibility and power of the presence of the organization. So, when the EU decision-makers talk to me, we have the same language, the same jargon. When we bring the local organizations there is a new understanding and new learning, a new way of representing the issues.’

One example typifies the experience. Says Irene Fedorovych, executive director of ‘NO Borders’ Social Action Centre in the Ukraine, ‘In 2013 we were holding the first seminar for minority communities and we had a member from a Roma community. We were explaining how it starts small and becomes bigger. I invited him when I was writing a shadow report, and he came to Geneva to present this report, to talk to the committee members and after that he came to me and said, “Okay, now I understand. It works.”’

These experiences have a multitude of benefits. ‘A local organization might think a national minister or a high-ranking politician is too far away and too impossible to approach because I’m just a local organization, but if they see a decision-maker in the EU is just a person to talk to, not special, like in everyday conversation, then they will be much more brave to approach their own national decision-makers,’ says Farkas. By addressing the EU, these organizations have the confidence to confront decision-makers in their country. In total, there were 31 advocacy campaigns and projects supporting policies at the country level. It is also important because these organizations know they are being listened to and their issues are visible in a regional context. Additionally, when EU representatives visit these countries they have contacts to reach out to so the relationship can be sustained.

The EU embraced these minority representatives and these bonds lasted long after the representatives left Brussels. This impact was evident as the EU organized meetings like this after the project finished. ‘They are funding one or two minorities to come to Brussels and they’re also skyping minorities they’ve been in contact with before,’ says Clarke. ‘We’ve got to the stage where the EU, without MRG consciously funding it, now continues an effort to make regular communication with minority organizations to ensure their input into progress reports on the Eastern Partnership.’ After the EaPMN finishes the lobbying of the EU, the final stage is implementation. Clarke says, ‘The national government is far more willing to work with you if the EU recognizes you as a partner.’ The EU has leverage which the network can then apply on the national government to implement recommendations.

‘If the EU is saying in Moldova we need better anti-discrimination legislation, and once it is in, you benefit from access to EU markets and greater development assistance, that’s an incentive to them. If the Moldova government says this little NGO isn’t credible, we’re not interested in Ukrainians, well then we’ve got information in EU reports, from UN treaty bodies, from Council of Europe reports which back up the information provided by our partners. Which means it’s very hard for the government to ignore them as reliable partners,’ says Clarke.

In Moldova, the Association of Ukrainian Youth of Moldova ‘Zlagoda’ has set up dialogues with national public authorities involved in human/minority rights protection. Dmitrii Lecartev, Executive Director, said: ‘Due to this project we had a chance to meet the MPs from the Commission of Human Rights and National Minorities and to voice up our concerns, to learn how they promote minorities’ rights in policy-making, etc. This project allowed us, to our surprise, to figure out that the Ministry of Internal Affairs is also dealing with minority issues. We managed to set up productive cooperation with them.’

The sharing of experiences was at the heart of network itself. There was a need for cross- NGO informational exchange. ‘In Brussels, at the Civil Society Forum, I’ve heard lots of comments from the other organizations, community-based, national organizations, that they lack opportunities to exchange practices between each other,’ says Shorena Kobaidze, EaPMN Project Coordinator.

More than 80 organizations in the EaPMN met two or three times annually for best-practice seminars. Says Kobaidze: ‘I’ve heard comments such as “This project is unique because it gives us an opportunity to exchange, because we are Belarusians, we are Ukrainians, we are Georgians, we are considered to be closer to each other while we don’t know about each other.” So basically minorities learned in there what was going on in their neighbouring countries.’

For instance, experience gained in Georgia was relevant to learning by those in Ukraine: ‘It was possible to use Georgian experience as they had some of the same situation before and they already had some tips and solutions and also other countries,’ says Fedorovych. ‘They [Georgians] had some presentations but we also discussed with them our questions and so it was a less formal presentation and more of a discussion. We were eager to learn because that was a situation we were facing in Ukraine.’

Clarke retells his most memorable best-practice seminar experience: ‘The one in Armenia, where we brought the first civil society activist from Azerbaijan to do a training and how all these NGOs are sitting with the Armenian KGB around them but the level of atmosphere of solidarity around that was very big. When we had the first minorities elected to the NGO platforms in Armenia, that was again what everyone speaks about as something that meant a lot to everyone in the project. Everyone took a sense of ownership or pride over that very early.’

To supplement these in-person seminars, the EaPMN launched a website and a Facebook page. This kept the partners in contact frequently and provided a hub for sharing up-to-date information. It also served as an online library about the organizations and minority situations which was unique.

Working with small or remote organizations was also a source of pride for the network. Fedorovych was a big supporter of small grants made as part of the project for two reasons. Her NGO, ‘NO Borders’ Social Action Centre, and other national civil society organizations were responsible for giving small grants, which empowered her organization. ‘It was our first time as a donor, building a network, making calls, collecting, reporting, helping them to make this project. For us it was definitely capacity-building.’

The capacity-building was similarly gained by the grantee. Fedorovych continues, ‘Providing them [small communities] with these small grants gives them the opportunity to try to do something small. Once they comprehend it and do it, and when it works, you see how much it means to people that they are being active and something is working, and you see that that is a great impulse for them to keep on working.’

For example, EaPMN conducted the first ever minority-focused event in Transnistria, Moldova, targeting cooperation between the local municipality and minority communities of the Transnistrian region, and involving minority youth in the activities. The work in Transnistiria was lauded by the external evaluator for its work in such a difficult political context.

In another instance, in Armenia, ‘we did convene the first ever civil society network meeting for minorities. The big feedback we got was that it was the first time they’d ever met, for most of them,’ says Clarke.

The next stage of the EaPMN, its future aspirations and who will manage it are unknown. But the external evaluator lauded the efforts of the project, ‘[It] managed to establish an informal network of minority CSOs [civil society organizations] for a broader cooperation, information- sharing and coordination on minority issues. It was the only network in the EaP [Eastern Partnership] region specifically for minority CSOs and minority activists. This coalition expanded and includes about 80 minority and human rights CSOs, as well as thinktanks and individual minority leaders.’