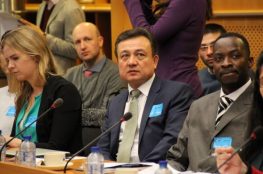 New York City, 8 May 2017 – On 26 April 2017, Uyghur human rights activist and member of the Unrepresented Nations and Peoples Organization (UNPO) Dolkun Isa, who was participating in the United Nations Permanent Forum on Indigenous Issues (UNPFII), was forced to leave the UN premises.

The incident occurred outside Conference Room 4, where Indigenous Peoples Organisations (IPOs), Forum members, UN agencies and States were discussing the implementation of the UN Declaration on the Rights of Indigenous Peoples (UNDRIP). Mr Isa, the co-founder and General Secretary of the World Uyghur Congress (WUC), was asked for his identification document by UN security and was then asked to leave the UN premises, without being given any explanation, despite his asking for a reason.

Despite efforts by the UNPO and the Society for Threatened Peoples, under which Mr Isa and his fellow human rights activist Omer Kanat were accredited as participants in the Forum, Mr Isa was not able to re-enter the building. Two days after the incident, on 28 April, he was denied a badge to be able to re-enter the UN and participate in the Forum.

This was not the first time Mr Isa was prevented from speaking at UN forums. In 2007, he was escorted out of the UN and briefly held into custody during the UN Human Rights Committee Session in Geneva, Switzerland.

“It is very worrying to witness once again the domination exercised by States within the UN system, especially in the framework of the UNPFII, namely a crucial UN forum that gives space to indigenous peoples to voice their concerns and recommendations”, said Marino Busdachin, UNPO’s General Secretary.

China Change, Human Rights in China, Human Rights Watch, the International Campaign for Tibet, Initiatives for China, Minority Rights Group, the Nonviolent Radical Party, Transnational and Transparty, the Ogaden People’s Rights Organisation, the Society for Threatened Peoples, Solidarité Chine, the Southern Mongolian Human Rights Information Center, the UNPO, the Uyghur Human Rights Project, the World Sindhi Congress and the World Uyghur Congress call on the UNPFII Secretariat to provide a full account of the causes of this incident. They also demand that the rights of indigenous peoples’ representatives to express themselves in this arena be unconditionally respected in the future.