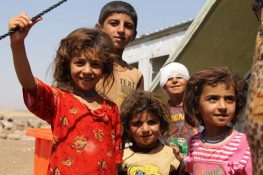 MRG intern, Helen Haile, a postgraduate student in International Relations at King’s College London focusing on political violence, the Middle East and human rights, takes a look at the horrifying figures behind the genocide of one of Iraq’s most vulnerable religious minorities.

What if you woke up tomorrow and were told you had to walk the streets in fear? But this isn’t your everyday, run of the mill fear. This isn’t a fear of being hit by a bus or car. This isn’t fear of your plane going down. Or fear of a spike in the crime rate in your neighborhood. This is different. What if you had to live in fear of harassment, discrimination, persecution, and in the worst-case, death? This is the daily reality of many religious minorities in Iraq. One group in particular has had to live in fear for years – Yazidis.

Who are Yazidis? Yazidis practice a religion taken from Zoroastrianism, Christianity, and Islam. Their total population worldwide is roughly 1.5 million. As Moni Basu explains in Voices of Iraq: Minorities on the edge of extinction, ‘[The Yazidis] pray to the peacock angel Malak Taus, whose other name is Shaytan.’ Shaytan means devil in Arabic and because of this the Islamic State of Iraq and Syria (ISIS) has labeled Yazidis infidels and devil worshipers, paving the way to ‘justified’ persecution. As described on MRG’s website, Yazidis of Iraq have not only experienced persecution by Sunni extremists but also experienced persecution and discrimination under ‘Saddam Hussein’s genocidal Anfal campaign alongside the Kurds and were forced to define themselves as Arabs.’

The fear has only increased with the emergence of ISIS. Labeled as genocide by the United Nations Human Rights Council, the persecution the Yazidis have been dealt is astonishing. In 2016, MRG published No Way Home: Iraq’s minorities on the verge of disappearance saying, ‘ISIS forces and commanders have committed war crimes, crimes against humanity and the crime of genocide, including summary executions, killing, mutilation, rape, sexual violence, torture, cruel treatment, the use and recruitment of children, outrages on personal dignity, and the use of chemical weapons.’ In response, as Basu explains, thousands of Yazidis have ‘fled their homes to escape the militant group’s brutality. Now, some of Iraq’s religious and ethnic minority communities teeter on extinction.’

The term ‘extinction’ alone should give you an idea of the severity of the issue, but quantifying the predicament truly exemplifies just how grave the situation is. Thousands of Yazidis have fled Iraq. An estimation predicts that 70,000 Yazidis have fled since ISIS’ targeting and now fewer than 700,000 remain.

In January 2017, a lecture titled Documenting Genocide: survey evidence on ISIS violence against Yazidis was held at the London School of Economics and Social Science (LSE). The event was chaired by Professor Toby Dodge and the main speaker was Dr. Valeria Cetorelli, a research officer at the LSE Middle East Centre and a Postdoctoral Fellow at the John Hopkins Center for Refugee and Disaster Response. At the event, Dr. Cetorelli presented the first survey evidence on the number and demographic profile of Yazidis killed and enslaved by ISIS. Dr. Cetorelli reported that upon taking territory back from ISIS in Iraq, kill sites had been identified and roughly 35 mass graves were found. In the mass graves, remains of 80 Yazidi women were found. The women found were above the age of 40: women deemed too old to be sold as sex slaves.

Dr. Cetorelli’s report is the first of its kind. In 2015, she engaged in research in multiple camps where Yazidis have been residing. She used random sampling within thirteen camps between November and December of 2015 in order to quantify the damage inflicted on the Yazidis since 2014. What she found was grim. Out of the 1,300 interviewed Yazidi households, in thirteen camps, there were 43 reported killings, 83 reported kidnappings, and 22 executions. Executions included being shot, beheaded, or buried alive. When it came down to the statistics, nearly 25 of every 1000 Yazidis were either killed or kidnapped. In the siege of August 2014, roughly 10,000 people were either killed or kidnapped. 3,100 of these were killed with half executed. An estimated 6,800 were kidnapped. When the survey was taken, one out of three of those kidnapped were still missing. Because of the limitations in data collection, says Dr. Cetorelli, it is very likely that the number of Yazidi people killed and kidnapped is higher as there are no family members left behind to report aggression against them.

Today, on the verge of extinction, Yazidi people continue to fight a battle they know too well. They have continued to flee but this time it is not from ISIS. In Yazidis who suffered genocide are fleeing again, but this time not from the Islamic State, published in March, Loveday Morris explains the Yazidis’ latest battle. Morris explains, ‘The fierce infighting among forces ostensibly meant to be battling the militants [Islamic State] now threatens to set back efforts to recapture more land and rebuild areas reduced to rubble.’

Yazidi fighters affiliated with a local force of the Kurdistan Workers’ Party clashed with the Rojava Peshmerga, a group of largely Syrian Kurds under the command of the regional government of Kurdistan. The clash between the groups poses a major challenge to the area as both forces once had their eye on one distinct goal: defeating the Islamic State. With the fighting between the groups, that goal has been further pushed away. With the addition of the Kurdish peshmerga forces as an obstacle, the road to recovery and equality for Yazidi people is going to be a difficult and grim one, but there is hope.

Many organisations are working tirelessly to ensure that Yazidi people are heard and fought for. MRG has recommended that planning begin for the post-ISIS era to ensure that affected minorities are able to return to their original homes and lands. MRG also recommends that institutions and legislation respond to the needs of Iraq’s ethnic and religious minorities by promulgating legislation that safeguards their rights as citizens and combats discrimination as well as increasing representation of minorities in security and police forces. These implementations and actions won’t make up for the cruelties Yazidi have experienced nor will it reverse the persecution faced by the Yazidi in the past, but they are actions in the right direction. It may take years, but for Yazidi it is a battle worth fighting.