A message for the world’s ‘top doctor’ 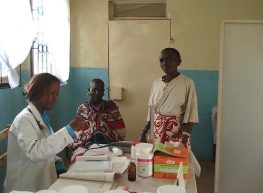 Cecile Clerc is MRG’s Head of Development and Partnerships. Here she explains her passion for global health and how no one should be left behind.

My almost obsessive interest for the World Health Organization (WHO) started when I read L’Adversaire by E. Carrere. It’s the true story of this guy who has lied all his life about being a doctor and pretended he was working at the WHO. He would go to Geneva on an almost daily basis and sometimes stare at the window of ‘his’ office until…( no spoiler here).

Well, I am somehow like him (minus the fact that I have never pretended to work there). I watch from a distance everything the WHO does: responses to world epidemics, new guidelines on diabetes, mental health…I am truly fascinated.

The election of the new director general of the organization was therefore and unsurprisingly something I followed closely. I did not have any preferred candidate. It was pleasant to follow an election which was about inclusion instead of the ‘them versus us’ rhetoric that has poisoned too many recent national elections across the world. It felt somehow like it was an election aligned with the stated goal of the organization, ‘to ensure the highest attainable level of health for all people.’

On 23 May, Dr T. Adhanom Ghebreyesus was appointed. Describing his priorities as he accepted the position, he reinforced the need to guarantee universal health coverage and promised to stand up for the rights of the poor. I can only welcome such a position. It is unacceptable that in 2017 access to health still remains a serious challenge for the most vulnerable communities worldwide.

Paul Hunt, a former UN Special Rapporteur on the Right to Health, summarized the picture pretty well when he wrote, ‘We live in a world of profound health inequalities, a world in which a person’s health (…) is determined by their ethnicity, the language they speak or their religious and cultural beliefs.’

I really hope that the new ‘top doctor’ will manage to make a difference in improving the health of all, including the most vulnerable and marginalized. Heading an organization responsible for the health of all 7.3 billion people on earth is no small task, but I will certainly be following his work…from a distance.

Comments are closed.
Filed Under: Health