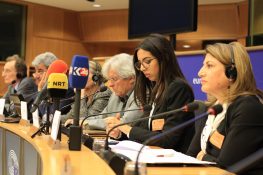 Brussels – 7 June 2017 – A conference organized to discuss the shape of Post-ISIS Iraq concluded with consensus on a broad array of steps to return displaced persons to their homes and rebuild. Noting that the impending fall of Mosul does not signify “Game Over” for European Union institutions and member states, the conference developed seven major options for Europe and Iraqi authorities for the “Post-ISIS” phase of the conflict in Iraq. As Conference Keynoter Adama Dieng, representing the UN Secretary General, noted “peace begins with peace of mind.”

“We cannot wait. We have to start the process now,” noted Conference Co-Chair and MEP Ana Gomes. In a chairman’s statement, Gomes and her fellow co-chair MEP Elmar Brok identified seven main priorities:

The conference chairs concluded that European Union diplomacy, mechanisms and resources should be better channeled to support implementation of these recommendations. The full statement can be downloaded at http://tinyurl.com/StatementoftheChair.

The conference took place to coincide with the impending liberation of Mosul, and was designed to follow up the Paris Action Plan presented of September 2015 at the International Conference on the Victims of Ethnic and Religious Violence in the Middle East convened in Paris, and its Madrid follow up meeting, held on 24 May 2017.

“This conference was convened on the third anniversary of the fall of Mosul, and sadly over the past three years there has not been systematic, open discussion of options to enable returns and rebuild in the Post-ISIS era,” said Institute for International Law and Human Rights Executive Director William Spence Spencer. “As a result, some minority groups fear the peace even more than the war.  And we must allay these fears immediately.”

The Conference was organized by the Institute for International Law and Human Rights, Minority Rights Group International, No Peace Without Justice, the Unrepresented Nations and Peoples Organization, and the Konrad Adenauer Stiftung.

Download a copy of the press release here PostISISconferencestatement final