How harnessing advances in technology and the power of civil society can revolutionize scrutiny of rights abuses in war, new report 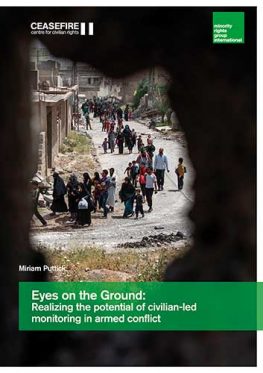 Advances in technology present a unique opportunity to revolutionize the civilian-led monitoring of rights abuses in armed conflict, say Minority Rights Group International (MRG) and the Ceasefire Centre for Civilian Rights, in a new report out today.

Using information gleaned from a three year pilot in Iraq, the report, Eyes on the Ground: Realizing the potential of civilian-led monitoring in armed conflict, contends that local civil society can be enabled, with the help of modern technology, to become central actors in the processes of monitoring, documentation and reporting of violations of human rights and international humanitarian law (IHL).

‘In Iraq, Syria, Yemen and many other armed conflicts in which widespread violations of the rights of civilians are taking place, the ability of the international community to monitor abuse is compromised precisely when such information is needed the most,’ says Miriam Puttick, MRG’s Civilian Rights Officer and author of the report. ‘In these situations, local civil society is best placed to ensure that violations are accounted for and the voices of victims are heard.’

Thanks to new media platforms, information uploaded from a conflict zone can reach an international audience almost instantaneously. Yet there is still a great deal of scepticism in official circles about the reliability of information produced by local civil society, say the rights organisations.

Drawing on an expert seminar held in Geneva in June 2017, bringing together senior representatives of international organizations working in IHL and human rights with NGOs pioneering civilian-led monitoring in the Middle East, the report recommends methods of strengthening civilian-led monitoring in the areas of verification, quality control, and security for both monitors and victims of violations.

The report also argues that information coming from traditional actors in conflict areas, such as local authorities, politicians or the military, often proves unreliable or ineffective at providing timely and complete information, while international monitors are frequently denied access. In this situation, civilians have a crucial role to play.

‘Much of the most valuable information we get from the world’s conflict zones now comes from civilians on the ground,’ said Mark Lattimer, MRG’s Executive Director. ‘The technology is there to hear their voices, but they need to be taken seriously, and to be supported.’

In five chapters the report examines the following issues: