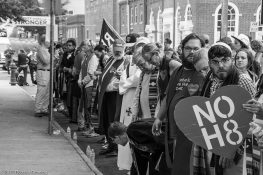 The alarming rise in racism, xenophobia and hate attacks in the USA is directly connected to the offensive rhetoric of President Donald Trump, says Minority Rights Group International (MRG), following the extreme-right demonstrations and violence in Charlottesville, Virginia, and other recent events across the country.

‘As a person who grew up in a place and time when Jim Crow laws ruled, I remember how the Klu Klux Klan reigned terror throughout large regions of the US using threats, arson and lynchings,’ says Gay McDougall, Chair of MRG’s Council and former UN Independent Expert on minority issues. ‘I am horrified that President Trump has opened the gates of hell to give them license again, along with Neo-Nazis and other white supremacists.’

According to the Southern Poverty Law Centre there has been an increase of 197% in anti-Muslim hate groups since 2015. The organisation reports that there are currently 917 hate groups operating in the US. The Anti Defamation League recorded a 34 percent increase in anti-Semitic incidents in 2016, including acts of harassment, vandalism and violence. Worryingly, in the first three months of 2017, the total jumped 86 percent.

Based on its experience around the world, MRG believes there is a direct link between what prominent leaders say and what happens on the ground; and a clear and imminent risk towards minorities if governments do not take a stand against hate. Essentially, Trump’s Tweets and dismissive comments have given a green light to bigots around the country to attack their neighbours, says the organisation.

MRG energetically reminds the US administration that political leaders are bound to defend fundamental rights and respect diversity, urges it to immediately adopt policies to combat hate speech and hate attacks, and to promptly investigate and prosecute all crimes motivated by racism and xenophobia in the USA.

‘I grieve for the families of Heather Heyer and the two officers,’ adds MacDougall. ’But if we do not take a strong stand against racism and what happened in Charlottesville, they will not be the last victims.’