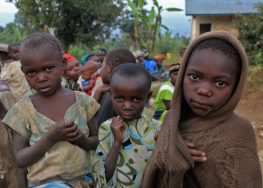 Minority Rights Group International (MRG) wholeheartedly condemns the killing and injuring of two indigenous Batwa, whilst they were peacefully gathering medicinal herbs, by guards in a national park in eastern Democratic Republic of Congo on Saturday.

According to information gathered by MRG’s partner organisation in the DRC, Réseau des Associations Autochtones Pygmées (RAPY), on 26 August, Batwa community member Nakulire Munganga, and his 17-year-old son Mbone Nakulire, entered the Kahuzi-Biega National Park (PNKB) to forage for medicinal plants to treat diarrhoea and cholera. At around 9 am the two men were shot by park guards on patrol; the son died on the spot and his father received bullet wounds in his right arm.

The Batwa men were from the village of Buyungule, which lies just outside the perimeter of the Park. Their rights as indigenous forest-dwelling people to enter the PNKB to gather resources vital to their traditional way of life, such as plants, dead wood, mushrooms and caterpillars, are guaranteed under the DRC Forest Code and the Conservation Act.

‘MRG is both shocked and saddened that these Batwa men were shot by members of the Park authorities whilst carrying out their perfectly legal traditional activities in their ancestral home,’ says Felicien Balikunda, MRG’s Africa Capacity Building Officer, who works closely with the Batwa community in DRC. ‘These crimes must be promptly investigated, and the law rigorously enforced against the perpetrators.’

Batwa, traditionally a hunter-gatherer community, are amongst the poorest and most vulnerable minority groups in the Great Lakes region of Africa, and have lived in the area now called the PNKB since time immemorial.

In 1937, a law was passed creating a nature reserve in the area, but Batwa were allowed to remain in the forest. However, in 1970, a further law was passed creating the national park, at the proposal of the Congolese Institute for the Conservation of Nature, which led to the eviction of some Batwa. In 1975, the PNKB area was further extended from 60,000 to 600,000 hectares, and more Batwa were evicted from their ancestral homes in the forest, without compensation. Non-Batwa have been allowed to remain in the park, or were evicted and compensated.

In November 2015, MRG and local organisation Environnement Ressources Naturelles et Développement (ERND), started a case on behalf of Batwa before the African Commission on Human and Peoples’ Rights, challenging the violation of their rights to property, non-discrimination and cultural heritage. It remains pending before the Commission.

In a press release yesterday, a coalition of organisations in eastern DRC, including RAPY and ERND, called for the authorities to protect Batwa communities living at the margins of the PNKB, and said, ‘We regret that today acts such as this remain unpunished, even though the rule of law in the DRC demands respect for the right to life and the physical integrity of all persons regardless of their social status or ethnic belonging.’

DRC is ranked seven on MRG’s Peoples under Threat index, which highlights countries most at threat of genocide or mass killing.

Photo: Batwa children from the village of Buyungule, where the victims of the shootings lived.