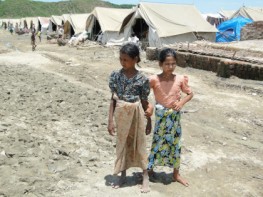 After tens of thousands of Rohingya have fled across the border into Bangladesh during the first days of September 2017, Minority Rights Group International (MRG) calls on the government of Myanmar to stop its campaign of mass reprisals against its Rohingya minority population and ensure that their rights are respected.

’International law is very clear on this point,’ says Nicole Girard, MRG’s South-East Asia Coordinator. ’Civilian populations must not be made to suffer, whatever the accusations of wrong-doing might be levelled against a few who may be in their midst.’

Aid agencies reported on 3 September that over 70,000 Rohingya had left Myanmar since this most recent spate of violence commenced in late August. The Myanmar authorities lay the blame on the armed opposition Arakan Rohingya Salvation Army (ARSA), which it says killed 12 government officials on 25 August and has allegedly been setting fires during fighting. But independent rights monitors report that state security forces alongside armed citizens attacked villages, killing and injuring Rohingya and burning down their houses in numerous villages across Rakhine state. Survivors describe family members of all ages – including children – having been killed. Soldiers reportedly have also opened fire on Rohingya as they tried to flee.

‘The army is continuing clearing operations in the most brutal form, much larger than those that occurred in October to November last year’, notes Chris Lewa, Director of the monitoring organisation the Arakan Project. ‘Village after village, the military is conducting a scorched earth policy; one by one, systematically villages are being burned down. The attacks cover three townships, but at the same time, this seems to be the first phase only. Last year, the next phase involved gang rape of women and mass arbitrary arrests, including of children.’

Protecting and assisting Rohingya civilians now appears to be even more fraught as the Myanmar government is also denying access to UN aid agencies. Agency representatives have said that field visit restrictions have led to them having to suspend relief operations in the area.

‘These atrocities have to stop immediately and humanitarian assistance has to be provided to stop preventable deaths,’ emphasised Lewa. ’The government must allow humanitarian access, not only in the area of conflict, but urgently resume food distribution in the existing displaced persons’ camp in Sittwe and elsewhere in Rakhine.’

Earlier in June 2017, Myanmar government officials said that they would refuse visas to a UN investigative mission, set up by the UN Human Rights Council, the main UN member states’ assembly in charge of the protection of human rights. The most recent events occur against a backdrop of decades-long exclusion and discrimination, including withdrawal of citizenship which has rendered Myanmar’s Rohingya community stateless and vulnerable.

According to MRG’s 2017 Peoples under Threat survey, Myanmar is currently among the top 10 countries most at risk of mass killing or genocide. When MRG issued this year’s survey results in July, it expressed deep concern over the fact that more and more countries are refusing access to international monitors.