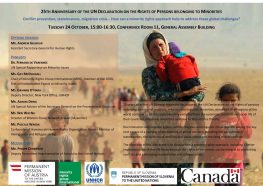 25 years after the UN General Assembly has adopted the UN Declaration on the Rights of persons belonging to national or ethnic, religious and linguistic minorities, minorities in all regions of the world continue to be disproportionately excluded from the economic, political and social life of their countries, and many minorities continue to face serious threats.

Discrimination and violence against ethnic, religious and linguistic minorities are among the key root causes of a number of phenomena of global concern, including the persistence of statelessness, the outburst of conflicts and social unrest and resulting migration flows.

The objective of this side event is to discuss how a minority rights approach, including a better implementation of the UN Declaration on the rights of minorities, can be integral to preventing conflicts and addressing humanitarian and refugee crises.

Mr. Adama Dieng, UN Special Adviser of the Secretary General on the Prevention of Genocide