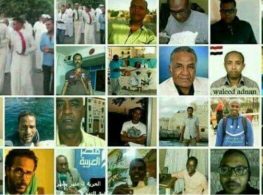 On 3 November they will have spent two months in pretrial detention for holding a protest calling for their constitutional rights to be upheld.

MRG fears that the prolonged detention of these detainees, and the continued holding of the court sessions pertinent to this case in the Aswan-based Shalal security camp rather than in a court of law, is without legal basis. Lawyers have confirmed that the last interview with the detainees was held on 4 September, some 50 days ago.

‘Given that no further questioning has taken place since shortly after their arrests nearly two months ago, MRG believes that the continued detention of the Nubian activists is politically motivated and unjustified’, says Carl Söderbergh, MRG’s Director of Policy & Communications. ‘We therefore demand their immediate release.’

On 30 October, eight of the Nubian detainees began a hunger strike. Whilst MRG is highly concerned for their health, we remind the Egyptian authorities that the wellbeing of the detainees is their responsibility, and that they are obliged to provide them with appropriate healthcare.

On 3 September the Nubians were arrested for holding a protest in Aswan that demanded the implementation of Article 236 of the Egyptian Constitution, which stipulates that the state allow the return of the residents of Nubia to their original territories located around Lake Nasser. At the same time however, a Presidential Decree designated 16 areas belonging to Nubian villages as military zones, effectively banning the return of the Nubians to these areas.

Egypt is ranked at 18 in MRG’s Peoples under Threat global index of those countries in the world where communities are most at risk of mass killing.

Nubians reside in the Upper Nile region and it is thought that they number as many as 3 or 4 million in Egypt. When the boundary between Egypt and Sudan was fixed as part of an Anglo-Egyptian agreement in 1899, Nubians found themselves under Egyptian rule and separated from their kin to the south. Egyptian Nubia is part of the Governorate of Aswan which also includes a populous area whose inhabitants are not Nubian. As a result, Nubians have found themselves a minority within their native province.