Ideas for Europe: A Minority Rights Perspective on Europe’s Refugees and Migrants 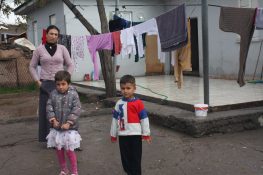 To a large degree, the questions of minority rights for Europe’s traditional or long-settled minority communities and the rights of new migrants or refugees have been treated separately, both institutionally and in practice. Of course, they have many challenges in common, not least the promotion of diversity and the struggle against racism. However, the potential contribution of minority rights standards and mechanisms to ensure effective inclusion of Europe’s migrant ‘crisis’ is relatively unexplored. To explore the idea of a minority-rights-based approach, in both practice, public policy and normative development for civil society organisations and decision-makers, Minority Rights Group (MRG) is hosting this forthcoming seminar with the participation of experts, drawing on experience from around the globe. The event will also present a new MRG report A Minority-Rights-Based Approach to Social Inclusion for Asylum Seekers, Migrants and Refugees’.

You can find all details in the enclosed programme. To confirm your participation, please RSVP to Marta Kubicza. marta.kubicza@minorityrights.org
Please indicate if you wish to attend both the Seminar & Reception

The event is organised in partnership with the Centre Maurits Coppieters.