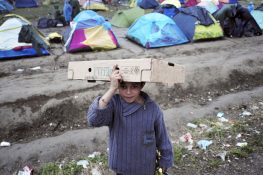 The mass influx of vulnerable individuals who differ from the majority population in terms of ethnicity, religion and language has brought to the fore many challenges for European states.

Since 2015, when more than a million asylum-seekers and migrants entered the European Union, there has been a marked increase in xenophobia, intolerance and hate crime, particularly towards those of Muslim origin. This growth of intolerance has also directly affected other minorities, including Jews and Roma, who are facing more and more barriers to exercising their rights as minorities. Public attitudes towards immigration are becoming more and more polarised, with populist parties gaining  influence.

However, Minority Rights Group International (MRG) has long argued that focusing on containment and deterrence of migrants, such as building ever higher and longer fences on Europe’s borders, or external detention camps in transit countries such as Libya, not only violates the human rights of migrants, but prevents successful integration and inclusion.

Dr Stephanie Berry, author of a new MRG report out today, argues that a minority rights based approach helps to forge cohesive societies. The University of Sussex academic says that although the scale of the current situation and the specific groups of people arriving at Europe’s borders may be new, the challenges facing European states are not; those same challenges have been present for centuries. Dr. Berry suggests that we can build on this experience, and learn to recognise diversity as a strength, rather than a threat.

The new report, Mainstreaming a Minority Rights Based Approach to Refugee and Migrant Communities in Europe, can be downloaded from MRG’s website here.

To accompany the report, in November 2017, Minority Rights Group Europe and the Centre Maurits Coppieters brought together experts from around the world to discuss an often overlooked aspect of one of the most pressing issues of our time. The seminar, Ideas for Europe – From Needs to Rights: A Minority Rights Perspective to Europe’s Refugees and Migrants, sought to take a fresh look at the inclusion and integration of refugee and migrant communities in Europe today, with particular emphasis on minority rights, and the tense relationship between the principles of universal human rights and rights for people from specific groups.

You can find out more by listening to this podcast, which includes extracts from the expert presentations at the seminar.

Photo: A Yezidi refugee boy protects himself against rain with a cardboard box at the Idomeni migrants’ camp in Greece. Credit: Iva Zimova / Panos.

Comments are closed.
Filed Under: Europe, Refugees and Migrants