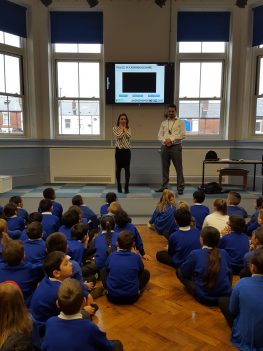 Tessa Polovina interned for MRG’s Publications department. Here she reports back from a UK conference on Roma rights.

For Roma people in Eastern and Central Europe segregation starts early – they are practically born into discrimination, violence and hostility. It is not unusual for them to live in settlements with no running water or electricity and to receive substandard education, if any at all. Living on the margins of society, some Roma may be lured into organised crime, while children are vulnerable to exploitation and trafficking. In the midst of anti-Roma sentiment across Europe, many of them have decided to try to stop the cycle of abuse and exploitation by coming to the UK. the first Roma arrived in the UK in the early 1990s from Eastern Europe in the wake of the fall of communism. However, the majority now living in the UK arrived from Central and Eastern Europe as economic migrants following the accession to the EU in 2004 and 2007.

In an attempt to learn more about their life in UK and whether anything has changed for the better, in December 2017 I attended a conference titled “Rights, Equalities and Future Roma Voices” organised by the National Roma Network, a partnership of voluntary and community organisations, Roma community groups and individuals, government representatives, statutory organisations, universities and researchers. The Network strives to support Roma integration into UK society. It is also a platform that enables their voices to be heard and give them a say in policymaking.

There I was lucky to meet Mr Petr Torak, founder and chief executive of COMPAS, a charitable organisation established in 2010 in Peterborough. Their overarching goal is to promote community cohesion by offering complementary education and organising community events in order to tackle social isolation and celebrate diversity.

Mr Torak was kind enough to share some of his thoughts and experiences from COMPAS’ work with Roma from Czech Republic and Slovak Republic. According to him, the main reasons for Roma fleeing their home countries are systematic discrimination, persecution and persistent poverty.

Once they have arrived to the UK their living conditions have significantly improved in all aspects. However, in some areas, such as education, major challenges are yet to be tackled. Roma children are very likely to be excluded from schooling and those that do stay enrolled see their progression rates well below the national average. Research done by University of Salford has shown that only 14% of Roma children succeed in reaching minimum GCSE expectations compared to 60% of their white peers, and that they are four to five times more likely to be excluded from school. COMPAS is trying to address this challenge by providing complementary education every Saturday and to motivate Roma children by presenting positive role models from the community which they can look up to.

I was keen to find out more about the correct etymology of the word Roma as I noticed there is a lot of misuse, misunderstanding and muddling of the terms “Roma”, “Gypsy” and “Traveller”. According to UK law there are four ethnic groups that have been granted a minority status: Romani Gypsies, Scottish Gypsy Travellers, Irish Travellers and Roma. It is estimated that there are at least 200,000 Roma and Travellers, including Romani Gypsies, in the UK. However, many of them hide their identity due to fear of discrimination. Thus, the numbers are most probably higher.

It is very important to note the differences between the above terms. Roma or Romani people originate from Northern India’s Punjab and Rajasthan regions, which they left some 1,000 years ago. They maintained a nomadic lifestyle for centuries until the communist regimes in Eastern Europe forced them to settle.

Travellers is a term used for many different groups of nomadic people, usually without a permanent base or housing. In the UK, it encompasses Romani Gypsies, Scottish and Irish Travellers, all of whom are native to the UK. Gypsy is an umbrella term used for both Roma and Travellers in the UK. The origin of the word Gypsy is still unclear, though it is thought to have derived from the demonym Egyptian, related to their supposed, but mistaken, origin.

In the UK 2011 census, under “ethnicity”, only “Gypsy and Irish Traveller” were offered as a subcategory of the “White” section and there were 58,000 people identifying as such, making up 0.1% of the population. Only recently has the UK government added a separate “Other Gypsy/Roma” subcategory under the “White” category. In Mr Torak’s opinion these categories are misleading and are not providing a clear picture of different subgroups in the UK. The pejorative meaning attributed to the word Gypsy, translating into “cigan” or “cikan” in the countries of Eastern and Central Europe, is very likely to discourage Roma to subscribe to that category. He believes that a single Roma category would provide a much better response in the next census in 2021.

As Europe’s largest ethnic minority, Roma should be discussed separately from Travellers/Gypsies in the UK. Even though Roma were historically nomadic people, today in the UK they live in ordinary housing and their socio-cultural background significantly differs from that of Travellers/Gypsies in the UK. In 2014, Anglia Ruskin University delivered a report in which it pointed out that the UK had not yet set out a national Roma policy in line with the 2011 European Framework for Roma Integration, which was created for EU countries as guidance for their own Roma strategies. Only Wales has provided a hands-on framework for Roma integration, but the overarching UK framework is still missing. Distinguishing Roma from other Gypsy/Travellers groups would mark a first step towards a more tailored approach to integration of Roma.

Despite the challenges ahead, Mr Torak holds a very positive view and believes that the socio-economic situation has significantly improved for most Roma migrants with their move to UK. According to him, Roma have gradually started building a positive relationship with schools, police and other authorities as they feel a higher degree of respect and equality.

When touching on issues such as this, it is difficult to avoid the topic of Brexit. Seeing that most Roma in the UK are EU nationals, they face the same situation as other EU citizens, at least on paper. However, one has to take into account the comparatively low level of Roma representation and practical ability to exercise their rights. Considering the complexities that will arise from the Brexit procedure, Roma will certainly need a high level of support from advocacy groups and organisations working on their side. One can only hope that the positives strides achieved so far will not be jeopardized by what lies ahead.