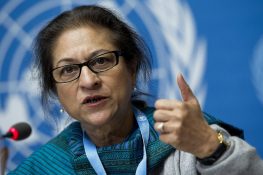 Minority Rights Group International expressed its sadness today on the passing of Asma Jahangir, a former Council member of the organisation.

‘Asma Jahangir was a brilliant human rights defender and a great Pakistani,’ said Mark Lattimer, MRG’s Executive Director. ‘Time and again, she stood up for the most vulnerable in society, whether it was women fleeing violence, religious minorities, or those targeted for their beliefs. She will be mourned by advocates of human rights right around the world.’

Ms Jahangir was a former member of the Council of Minority Rights Group International, where she helped to set the strategy for the organisation and was always an insistent voice for MRG’s work supporting minority activists on the ground.

Ph: UN Geneva (by Jean-Marc Ferré)
Asma Jahangir during the press conference presenting the findings on the implications Israeli settlements upon the human rights of the Palestinian people, 31 Juanary 2013.