Sri Lanka: Outbreak of religious violence against Muslims; MRG calls for end to impunity, arrest and prosecution of those responsible for attacks and hate campaigns 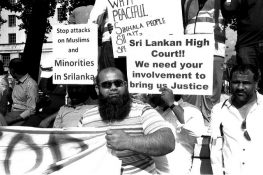 Minority Rights Group International (MRG) condemns the religious violence against Muslims over the last week, and urges the Sri Lankan authorities to apply the full force of the law to those responsible for the attacks.

Following anti-Muslim violence on 26 February in the eastern town of Ampara, riots broke out on 5 March in Kandy, Central province. According to reports, one person has been killed, a mosque attacked and a number of Muslim-owned businesses set ablaze. Several individuals have been arrested in relation to the events.

Sri Lankan activists say the violence is being perpetrated by Buddhist extremist groups, who have reportedly travelled from other parts of the country into Kandy to conduct the attacks.

‘While recent statements made by state officials condemning the violence and calling for action are welcome, what is now needed is swift and decisive action to secure accountability and assure Muslims that they will be protected under the law. This must include the arrest and prosecution of perpetrators of this violence, including those responsible for spreading hate speech,’ says Claire Thomas, MRG’s Deputy Director.

This latest outbreak of unrest between religious communities is the most serious since President Maithripala Sirisena assumed power in 2015. MRG recognises that the government has made some minor progress in addressing religious intolerance, but notes that law enforcement authorities have been seen to downplay the severity of attacks against religious minorities, continue to remain partial to Buddhist groups, and are hesitant to arrest and take action against Buddhist monks, some of whom are reportedly at the forefront of these recent incidents.

‘The government, religious leaders and law enforcement must show clear commitment to address ethno-religious violence, take active steps to build more inclusive communities, and work harder to ensure protection of the rights of all religious communities in the country if Sri Lanka is to move towards a more peaceful and sustainable future,’ adds Thomas.