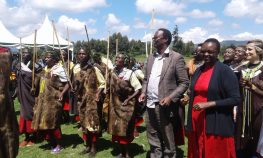 On 26 May 2017, after 8 long years, the Ogiek indigenous community won an historic land rights case against the Kenyan government at the African Court of Human and Peoples’ Rights. On the anniversary one year later, they celebrated the victory in their homeland, together with a whole host of supporters and allies. MRG was immensely proud to be part of the celebrations. Here a former member of staff and the current head of our office in Africa report back.

Lucy Claridge, former Legal Director at MRG, who now heads up Amnesty International’s strategic litigation programme, was a key player in the case, and guest of honour at the festivities.

The sun shines brightly as we navigate the muddy uphill track to Nessuit, a small village in Njoro sub-county, about an hour from Nakuru, Kenya.

‘The weather is being kind to us today.’

We agree – it has been raining hard for several months and the dirt roads are tricky to pass at points. I cast my mind back to this time a year ago, when I was in Arusha with many members of the Ogiek community, ready to receive the long-awaited ruling of the African Court of Human and Peoples’ Rights in their case challenging the denial of their indigenous land, cultural, religious and other rights over Kenya’s Mau Forest.  There had been a sense of nervousness and apprehension, but also excitement, on that day.  Even if the Ogiek did not win their case, we decided, the fact that this minority community of just 35,000 people were ventilating their issues in high profile litigation before Africa’s top human rights court was a success in itself.

Today, the mood is different.  On 26 May 2017, after 8 long years, the Ogiek did win their case: the Court recognised the Ogiek’s rights over their ancestral land in the Mau.  One year after the historic ruling has been issued, the Ogiek have come together with other indigenous communities of Kenya and Africa to celebrate the ruling and, just as importantly, to call for its implementation.  The jubilation and expectation amongst the several thousand attendees is palpable.

We plant trees to commemorate the occasion.  Ogiek from Kipkurere, dressed in traditional costume made from colobus monkeys, demonstrate their customary practice of making fire, in order to smoke out beehives and gather honey.  There are speeches: calls for the Ogiek judgment to be respected and requests that the Presidential Task Force established to oversee implementation take meaningful steps forward and engage with the community.  Kenya National Commission of Human Rights Chairperson Kagwiria Mbogori, emphasises the need for the Government to respect the rights of the indigenous peoples. Korir Singoei, Legal Adviser to Deputy President Ruto and member of the Task Force on Ogiek implementation, pledges his ongoing support to the Ogiek and states he will work with the Ogiek to see the case implemented.

And there is dancing, so much colourful dancing.  Ogiek women in green and brown, evocative of the forest; Samburu women in bright yellow, adorned with huge beaded necklaces and headdresses; Endorois moran leaders leaping in vibrant red; Sengwer women spring deftly in bark dresses.  We all join in.  Daniel Kobei of Ogiek Peoples’ Development Program (OPDP) is presented with a goat and a large horn full of traditional alcohol; I am repeatedly adorned with new outfits, necklaces and headdresses made of beads and indigenous plants (and marvel at the Samburu women who manage to dance in these necklaces, as they are heavy!); and gifts of Ogiek honey are imparted to all those who have contributed to the success.  And still the sun shines.

Yet there is a wider context to the festivities.  This is a well-earned celebration but also a call for action.  The Ogiek’s denial of their rights over the Mau Forest was justified by the Government of Kenya as necessary for conservation.  The Court however found that their eviction could not be justified on that basis, especially in the face of considerable evidence indicating that indigenous peoples play a role in conserving natural resources, and showing that the Ogiek had not in fact been responsible for the forest’s destruction.  And yet so many indigenous peoples in Africa and throughout the world face the same challenges.  Just 6 months after the Ogiek ruling, Kenya’s Sengwer suffered brutal evictions from their home in Embobut Forest, western Kenya, at the hands of Government and also in the name of conservation.  The Kenyan Government has declared itself committed to the implementation of the Ogiek judgment, but this will require a systemic change in policy and practice towards all its indigenous communities.  It requires action, not words.

As we head back towards Nakuru, the message is clear.  The Ogiek – and indeed all indigenous peoples in Kenya and East Africa– want justice, and they want justice now.

Agnes Kabajuni is MRG’s Africa Regional Manager at our office in Kampala, Uganda. She too was present at the celebrations, and planted a symbolic tree in our name.

On Saturday all roads led to the Ogiek homeland in the Mau Forest, known to many as Kenya’s water tower. It was the first anniversary since the Ogiek won a case against the Kenyan government at the African Court of Human and Peoples Rights

The Ogiek celebrated with fanfare. They enjoyed the solidarity of other indigenous groups such as the Samburu, Maasai and Endorois. Many others turned up dressed in most colourful attire and cultural regalia. Among such were the King from the Ogoni people in Nigeria and a Maasai elder from Tanzania. In full agreement with the joyous mood, the weather displayed nature’s best. It was the brightest day one could ask for and a contrast to the wet grounds from previous rains.

I joined Samburu Women Trust members in a matatu taxi. It bumped up and up the rough road leading to the Mau hinterland. In response to the recent heavy rains in the area, Kenya’s most beautiful landscape was richly covered in green farmlands with the Mau Forest gracing the horizon.

The arrival of visitors coincided with a tree-planting ritual signalling the Ogiek’s commitment to protect the environment they’ve lived in for centuries and call their home. I could not help but plant a tree on behalf of Minority Rights Group International who have walked this long and arduous path with OPDP and the Ogiek peoples.

Once we were seated, one cultural dance after another warmly welcomed the guests. The Ogiek came out in big numbers, young and old and warmed up by the celebratory atmosphere. Their brown animal skin blankets dotted the occasion giving meaning to the event. Among them were Ogiek elders representing Nakuru, Narok, Kericho, Baringo, Uasin Gishu and Mount Elgon.

All indigenous groups present joined the Ogiek to recognize and display gratitude through songs and dances to two people who really made the victory a reality. Lucy Claridge, former Legal Director at MRG and a key player in the case, and Daniel Kobei, Executive Director of OPDP. They received many gifts from the different groups, who sang their praises and called the two to join the dances.

I wasted no time to join in a few dances to feel the excitement. The day ended with a sumptuous lunch in which all joined, and as I left for my hotel in Nakuru, I could not help but think how remarkable it would be if the government of Kenya respected the judgment and expeditiously remedied the Ogiek people with reparations, compensation and undertaking measures to ensure their protection from future violations.

The Ogiek victory is indeed a victory for many other indigenous peoples around the African continent who have waited for so long for justice for the lands they lost, the lives shuttered, livelihoods negatively impacted, culture and spiritual heritage vanished.

To the Ogiek, the wise words of the Chief Guest should provide you with a rich text to reflect on, ‘You have the responsibility to protect the environment for the next generation and this as embedded in your cultural heritage should be a guiding light as you continue to struggle for your human rights.’

Daniel Kobei also put it right in his speech, ‘That it is just a first step on the staircase of land justice whose end you might not see now. Keep the hope alive and sustain the struggle.’